No038 MY Guys and Dolls musical poster 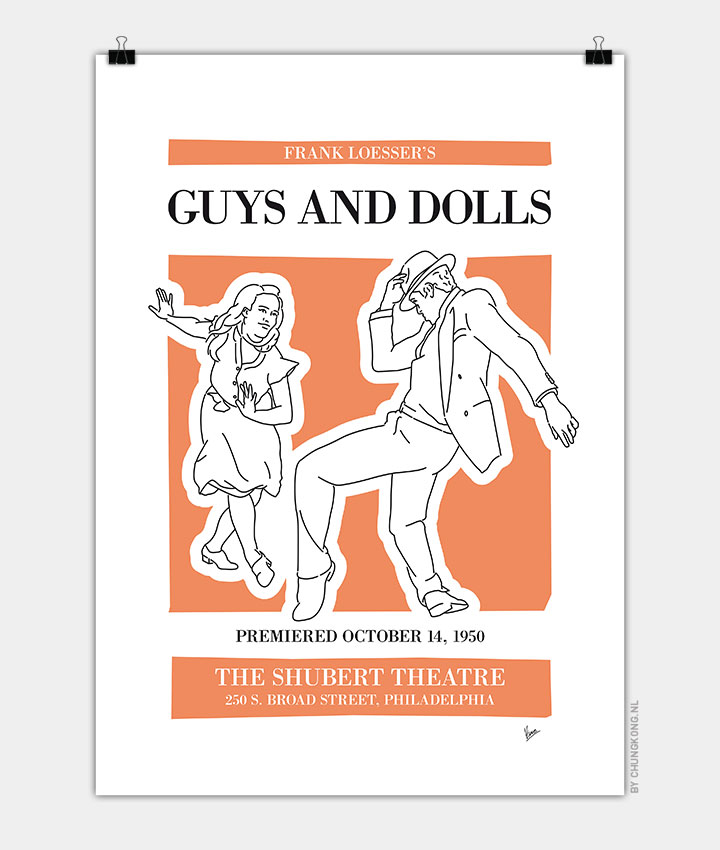 Guys and Dolls is a musical romantic comedy involving the unlikeliest of Manhattan pairings: a high-rolling gambler and a puritanical missionary, a showgirl dreaming of the straight-and-narrow and a crap game manager who is anything but.

Set in the Manhattan of Damon Runyon’s short stories, Guys and Dolls tells of con-man Nathan Detroit’s efforts to find new life for his illegal, but notorious, crap game. When their trusty venue is found out by the police, Nathan has to find a new home for his crap game quickly – but he doesn’t have the dough to secure the one location he finds. Enter Sky Masterson, a high-rolling gambler willing to take on any honest bet with a high enough reward attached. Nathan bets Sky that he can’t take the “doll” of Nathan’s choosing to Havana, Cuba, with him on a date.

When Sky agrees to the bet, Nathan chooses uptight Evangelist Sergeant Sarah Brown, head of Broadway’s Save-a-Soul Mission. Sky thinks he’s been duped, but he’s in for even more of a surprise when his efforts to woo Sarah are so successful that he falls in love with her himself! Guys and Dolls takes us from bustle of Times Square to the dance clubs of Havana to the sewers of New York City as it demonstrates the great lengths to which a guy will go when he truly falls in love with a “doll.”