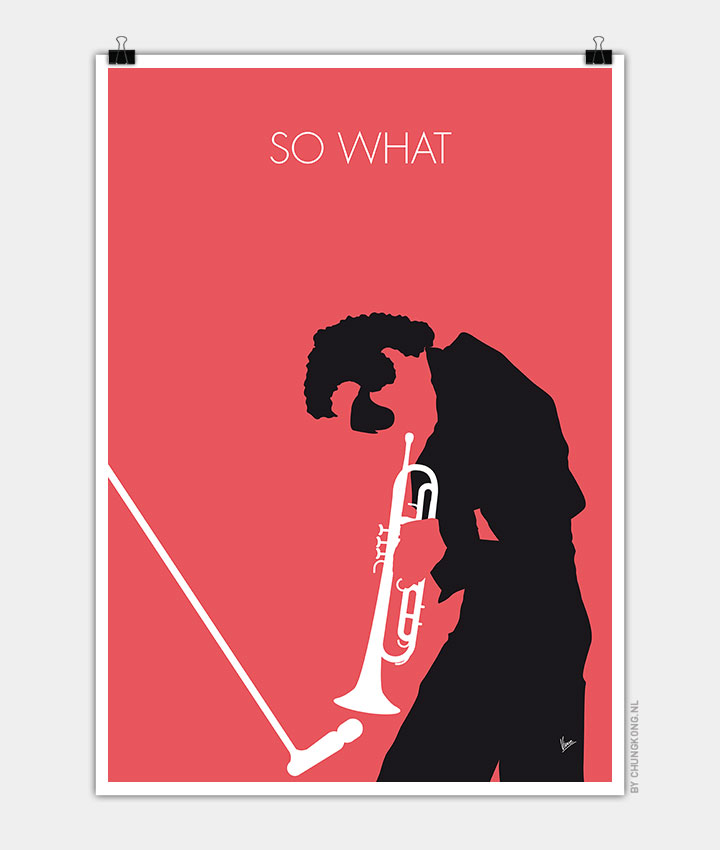 “So What” is the first track on the 1959 album Kind of Blue by American trumpeter Miles Davis.

It is one of the best known examples of modal jazz, set in the Dorian mode and consisting of 16 bars of D Dorian, followed by eight bars of E♭ Dorian and another eight of D Dorian.

The piano-and-bass introduction for the piece was written by Gil Evans for Bill Evans (no relation) and Paul Chambers on Kind of Blue. An orchestrated version by Gil Evans of this introduction is later to be found on a television broadcast given by Miles’ Quintet (minus Cannonball Adderley who was ill that day) and the Gil Evans Orchestra; the orchestra gave the introduction, after which the quintet played the rest of “So What”. The use of the double bass to play the main theme makes the piece unusual. This arrangement was later performed and recorded as part of the album Miles Davis at Carnegie Hall.

The distinctive voicing employed by Bill Evans for the chords that interject the head, from the bottom up three notes at intervals of a perfect fourth followed by a major third, has been given the name “So What chord” by such theorists as Mark Levine. While the track is taken at a very moderate tempo on Kind Of Blue, it is played at an extremely fast tempo on later live recordings by the Quintet, such as Four & More. The same chord structure was later used by John Coltrane for his standard “Impressions”. Both songs originate in Ahmad Jamal’s 1955 cover of Morton Gould’s “Pavanne”.

The actor Dennis Hopper, in an interview in 2008 with Men’s Journal, claims that Davis named the song after intellectual conversations with Hopper, in which Hopper would reply, “So what?”