No1133 My A League of their Own minimal movie poster 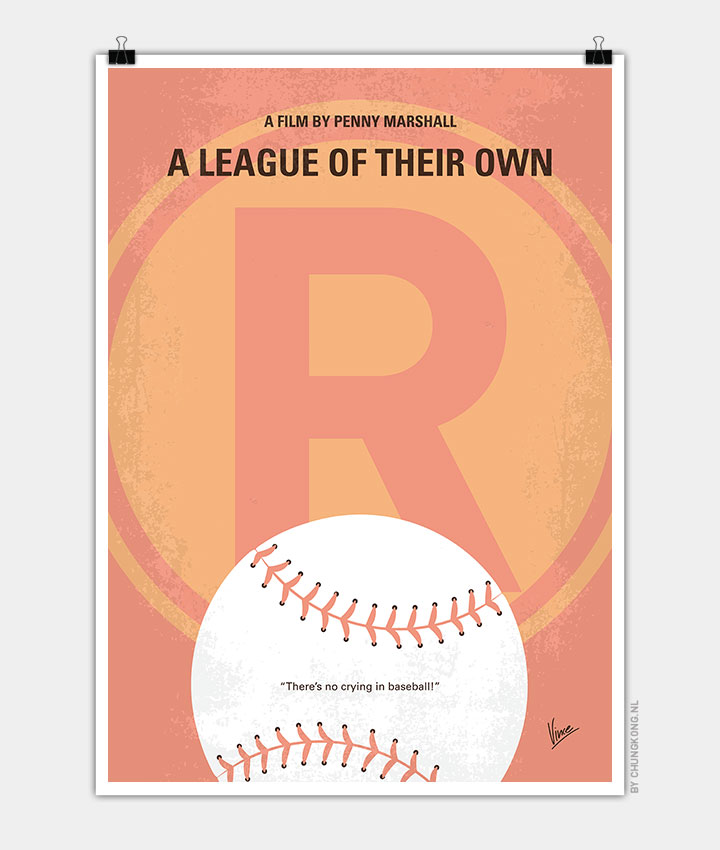 Two sisters join the first female professional baseball league and struggle to help it succeed amidst their own growing rivalry.

Storyline
In a small town in Oregon, farm girls Dottie Hinson (Geena Davis) and Kit Keller (Lori Petty) are sisters who compete with each other, even over the little things. Older, prettier, more settled and married Dottie is the catcher for the local softball team sponsored by Lukash Dairy. Kit is her younger sister, and pitcher on the same team, who feels that she can’t measure up to Dottie in her own eyes, or in the eyes of others. With so many young men overseas fighting the Axis, there is a danger that professional baseball will be shut down for the duration of the war. A well-known candy manufacturer, Walter Harvey (Gary Marshall), contrives the idea to create a professional baseball league for women; both the keep the sport alive and to make a buck or two. Dottie is recruited by a scout (John Lovitz) for this new league but refuses to go unless her sister is allowed on the team. On the way to Chicago they also intervene to get an outstanding batter, Marla Hooch (Megan Cavanaugh) a try-out as well. Once in Chicago, they are introduced to the other girls who will be on one of the four teams: May and Doris (Madonna and Rosie O’Donnell) are close friends from New York; Shirley Baker (Anne Cusack) is an illiterate farm-girl. These women, along with their team-mates, begin a journey that opens up a whole new world, far beyond that of the baseball diamond, lead by team manager, Jimmy Dugan (Tom Hanks), a washed-up star ruined by alcohol and angered and embarrassed to be the coach of a girl’s team.