No418 My WarGames minimal movie poster 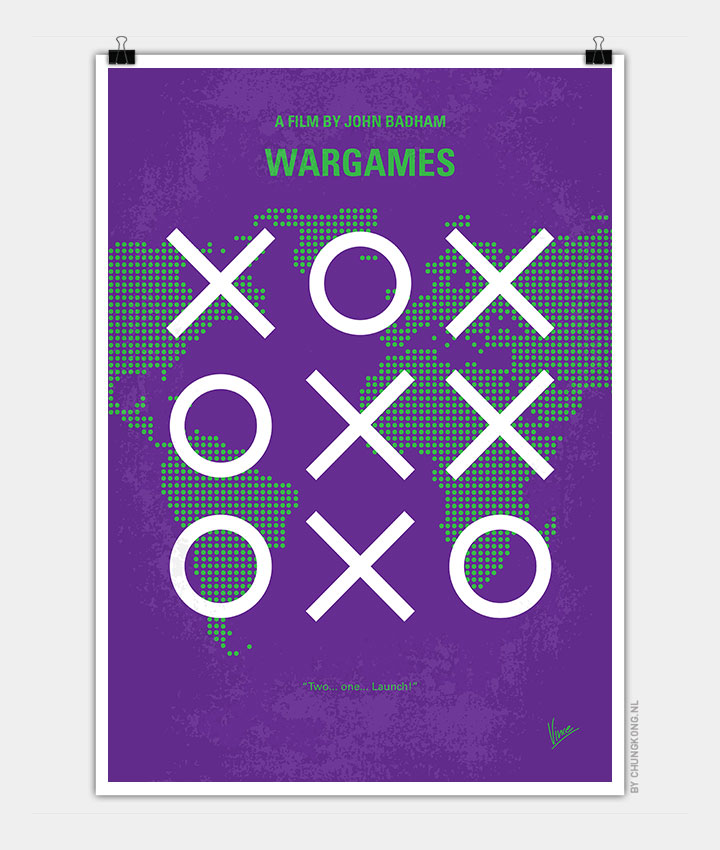 A young man finds a back door into a military central computer in which reality is confused with game-playing, possibly starting World War III.

Storyline
The US Air Force has decided to change their missile strike planning and command procedure from a human directed one, where in simulations many officers were unwilling to “turn the key” upon order, to an intelligent computer process, which takes that fallible human factor out of the equation. This change has its supporters, such as NORAD chief engineer John McKittrick who suggested it, and its detractors, such as Air Force General Beringer. The system chosen is called the War Operation Plan Response, or WOPR for short, developed by brilliant but now deceased scientist Stephen Falken, who programmed the system to learn continually through game simulations. Meanwhile, David Lightman, an intelligent but academically unmotivated Seattle based high school student, is a computer whiz. In trying to hack into a video game software company, he unknowingly hacks into WOPR using one of the listed games, Falken’s Maze, as the path to discovering the system’s back door password, Joshua, the name of Stephen Falken’s son who died at age five. David and his new friend, popular but equally unmotivated student Jennifer Mack, believe he’s hacked into a games company and they start to play the most intriguing game listed, namely Global Thermonuclear War. David and Jennifer soon realize that what they are doing is not a game when news of simulated attacks on the US, exactly the type David and Jennifer plotted in the “game”, hits the media. David believes he’s in even more trouble when Joshua calls him back, still playing the game, with its ultimate goal of winning. WOPR or Joshua, in playing the game, is still simulating Soviet attacks on the US, which Beringer believes to be real and who orders appropriate responses against the Soviets. As the authorities close in on David, with people like McKittrick believing him to be a spy, David tries to enlist the help of the one person who knows Joshua’s end goal and can probably stop Joshua from achieving that goal, while he needs to elude capture by the authorities.