No528 My The Girl with the Dragon Tattoo minimal movie poster 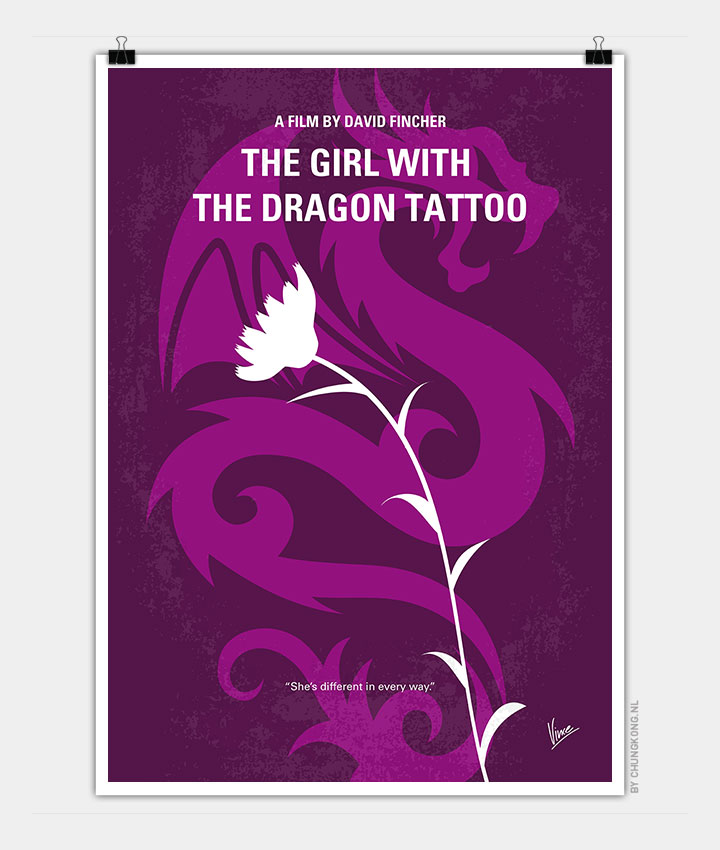 Journalist Mikael Blomkvist is aided in his search for a woman who has been missing for forty years by Lisbeth Salander, a young computer hacker.

Storyline
Stockholm-based Mikael Blomkvist, co-owner and co-editor of Millennium magazine, has just lost a high profile libel case resulting from an article he wrote on businessman Hans-Erik Wennerström. This loss has the potential to ruin Mikael professionally. As such, he leaves the magazine in the hands of the other co-owner/co-editor, Erika Berger, with who he is openly having an affair, which ruined his marriage. Even in Erika’s hands, the magazine is also suffering because of the scandal and resulting loss of ad revenue. Because of Mikael’s investigative abilities as a journalist, he receives an offer by wealthy and aged Henrik Vanger: solve the forty year old cold case of his missing and presumed dead grandniece, Harriet Vanger, who was only sixteen at the time of her disappearance. Despite Henrik’s generous financial compensation, which could also save the magazine, Mikael is unconvinced to do the work until Henrik adds one additional piece of compensation that money can’t buy. Mikael will largely do the work on Hedeby Island just off of Hedestad in northern Sweden, the island where Harriet was last seen, and where most of the dysfunctional extended Vanger family still lives, they who are among the suspects. To the family, Mikael is solely writing a chronicle of the Vanger family, without them knowing that his primary task is to find Harriet’s killer. As Mikael proceeds with his investigation, he asks for a research assistant. Who Henrik’s lawyer recommends is a young woman named Lisbeth Salanger, who conducted the background check on Mikael which Henrik ordered in preparation to hire him for this job. Mikael agrees with the choice when he sees that check she did of him, he knowing that she could only have found out key pieces of information through one means, which could help in this matter. Lisbeth is a brilliant investigator, but troubled in her personal life, which includes being under state guardianship due to incidents that happened while she was growing up. Despite what he knows of Lisbeth through her research of him, and despite her alternative appearance, Mikael begins to trust her, and she him – the first person she trusts in establishment in a long time – as they tie Harriet’s disappearance to a series of what look to be murders of young women leading up to the disappearance. Through the case, Lisbeth begins to see a different life for herself, while Mikael has the larger goal of regaining his good name by knowing that Wennerström is much what he wrote.