No543 My Gandhi minimal movie poster 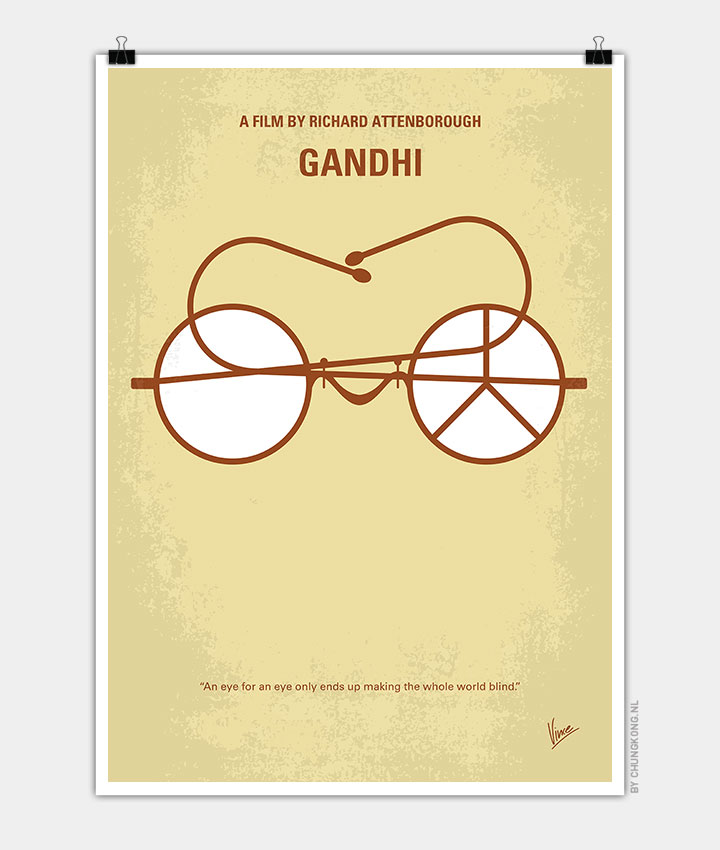 The life of the lawyer who became the famed leader of the Indian revolts against the British rule through his philosophy of nonviolent protest.

Storyline
In 1893, Gandhi is thrown off a South African train for being an Indian and traveling in a first class compartment. Gandhi realizes that the laws are biased against Indians and decides to start a non-violent protest campaign for the rights of all Indians in South Africa. After numerous arrests and the unwanted attention of the world, the government finally relents by recognizing rights for Indians, though not for the native blacks of South Africa. After this victory, Gandhi is invited back to India, where he is now considered something of a national hero. He is urged to take up the fight for India’s independence from the British Empire. Gandhi agrees, and mounts a non-violent non-cooperation campaign of unprecedented scale, coordinating millions of Indians nationwide. There are some setbacks, such as violence against the protesters and Gandhi’s occasional imprisonment. Nevertheless, the campaign generates great attention, and Britain faces intense public pressure. Too weak from World War II to continue enforcing its will in India, Britain finally grants India’s independence. Indians celebrate this victory, but their troubles are far from over. Religious tensions between Hindus and Muslims erupt into nation-wide violence. Gandhi declares a hunger strike, saying he will not eat until the fighting stops. The fighting does stop eventually, but the country is divided. It is decided that the northwest area of India, and eastern part of India (current day Bangladesh), both places where Muslims are in the majority, will become a new country called Pakistan (West and East Pakistan respectively). It is hoped that by encouraging the Muslims to live in a separate country, violence will abate. Gandhi is opposed to the idea, and is even willing to allow Muhammad Ali Jinnah to become the first prime minister of India, but the Partition of India is carried out nevertheless. Gandhi spends his last days trying to bring about peace between both nations. He thereby angers many dissidents on both sides, one of whom finally gets close enough to assassinate him.