No646 My Tootsie minimal movie poster 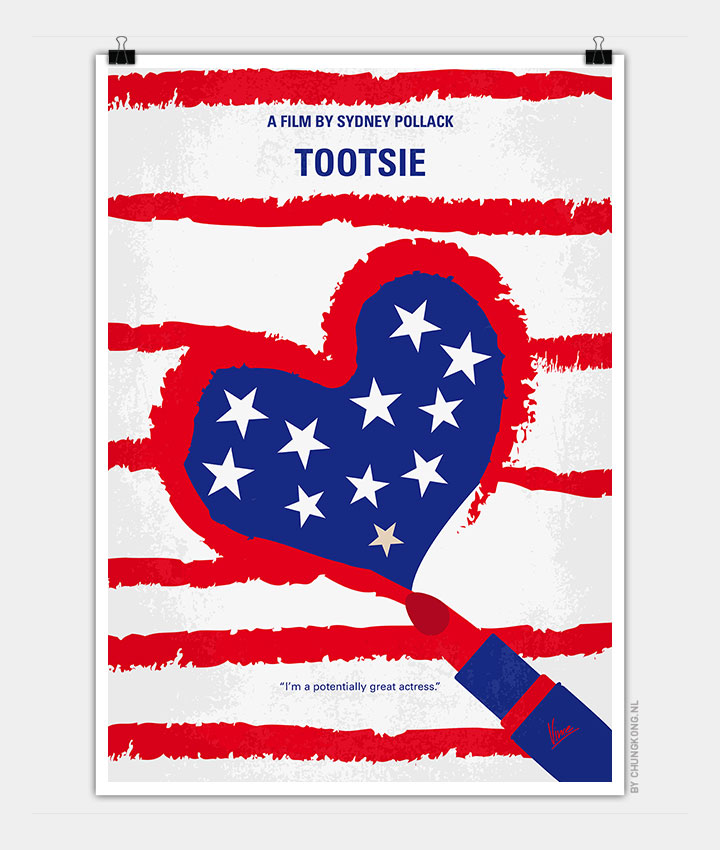 Michael Dorsey, an unsuccessful actor, disguises himself as a woman in order to get a role on a trashy hospital soap.

Storyline
Michael Dorsey is renowned in the entertainment field for being a good but difficult and temperamental actor. He is informed by his agent, George Fields, that no one will hire him because of his bad reputation. In his personal life, Michael is a bit of a cad who treats women poorly, especially his long term friend and fellow actor Sandy Lester, a doormat of a woman who already has self-esteem issues. Both to prove George wrong and to raise money to finance a play written by his roommate Jeff Slater so that he and Sandy can star in it, Michael, incognito as female Dorothy Michaels, auditions for a role in Southwest General, a daytime serial. The role is of Emily Kimberley, the tough, no-nonsense administrator of the hospital. As Dorothy, Michael injects into his audition his own sensibilities, which lands him the short term role. As Michael progresses in the role, only George and Jeff know Dorothy’s true identity. As Dorothy, Michael continues to play the role as he himself would, often ad libbing. He detests his director, Ron Carlisle, for the way he treats him and women in general (much the way Michael treated women himself), including Ron’s girlfriend, lead Southwest General actress Julie Nichols. Dorothy treats Julie with care and respect, and begins to fall in love with her. However, two men fall for Dorothy, namely Southwest General’s long time Lothario lead actor John Van Horn, and Julie’s father Les. Michael has to find a way to let Julie know his feelings as a man without ruining their friendship. Worse problems arise for Michael when Dorothy’s no-exit clause contract on Southwest General is extended, meaning Michael may have to pretend to be Dorothy for much longer than he was originally intending.