No659 My Three Days of the Condor minimal movie poster 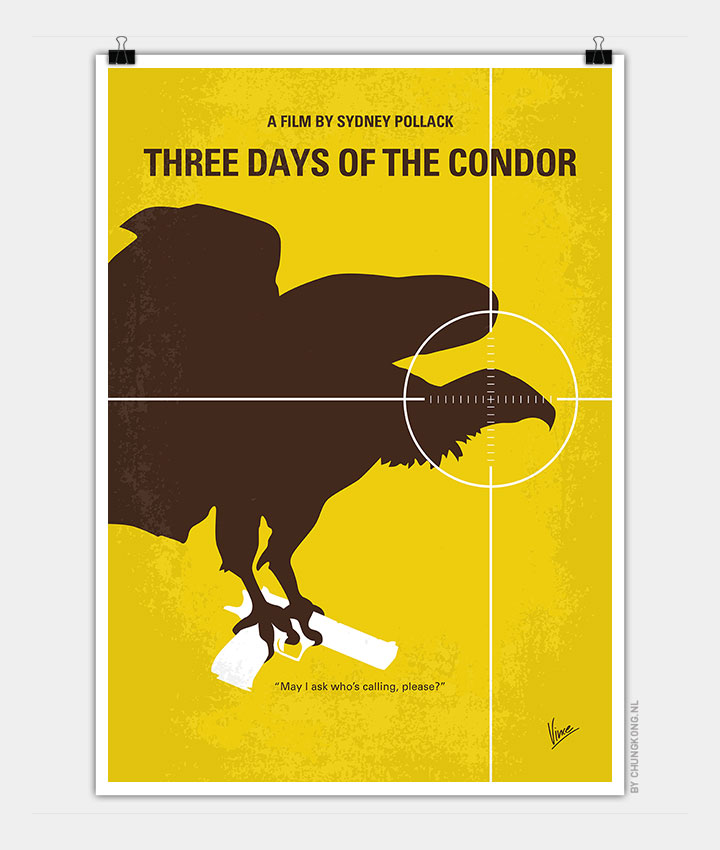 A bookish CIA researcher finds all his co-workers dead, and must outwit those responsible until he figures out who he can really trust.

Storyline
Joe Turner, code name Condor, works as a reader for Section 17 – fronting as the American Literacy Historical Society – of the Central Intelligence Agency (CIA). The section’s readers read everything that is published to see if the material is being used or planted by national security agencies for the US or enemy regimes in actual operations. The office for the section, which is comprised of eight people in total, is located in a nondescript but secure building in New York City. After returning to the office from a lunch food run for which he initially left the building through an unofficial entrance/exit, Condor finds that all six of his colleagues at work that day, including his girlfriend Janice Chon, have been executed, their dead bodies strewn throughout the office. The seventh has been murdered in his home. Not knowing any of his superiors outside the section, Condor slowly begins not to trust the organization itself. After a botched attempt to bring him in, Condor decides to go on the run and try and figure out what is happening on his own. In his quest, Condor kidnaps a young, seemingly lonely woman named Kathy Hale, who, despite being scared by what is happening, eventually believes Condor’s story and decides to help him. He also believes the executions have something to do with the tall Alsatian accented man he keeps encountering, and the last report he wrote and submitted to his superiors outside the section.