No672 My Night at the Museum minimal movie poster 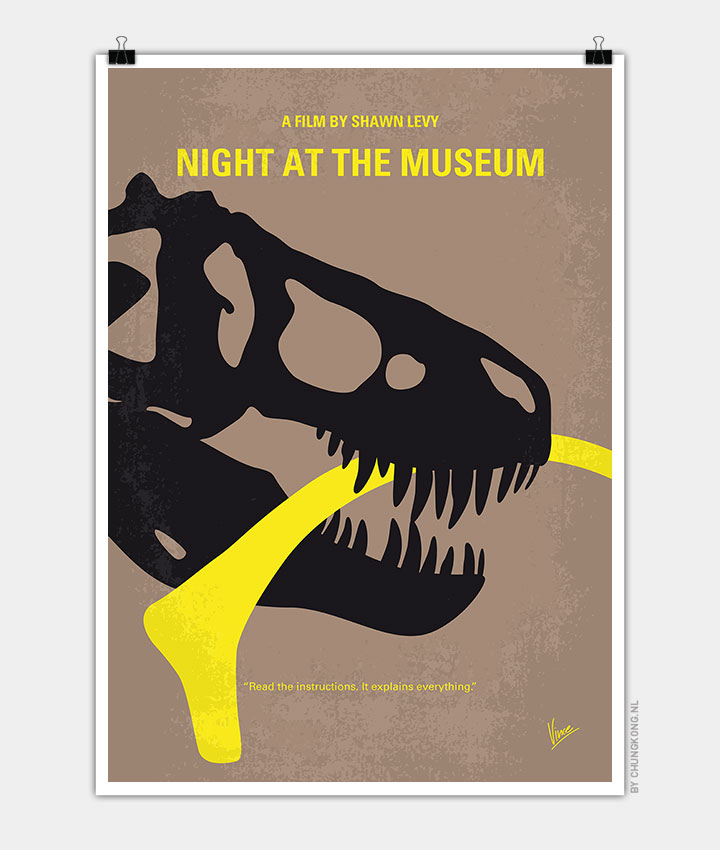 A newly recruited night security guard at the Museum of Natural History discovers that an ancient curse causes the animals and exhibits on display to come to life and wreak havoc.

Storyline
Larry Daley is divorced, unable to keep a stable job, and has failed at many business ventures. He also has failed in his dream job to be an inventor because The Clapper light switch has “stolen his thunder” for his similar invention “The Snapper.” His ex-wife Erica Daley believes that he is a bad example to their eleven year-old son Nick Daley, and Larry fears that Nick respects his future stepfather, bond trader Don, more than him particularly because Nick tells him that he wants to leave the sport he and Larry followed when living together; hockey, to become a bond trader like Don.

Cecil Fredericks, an elderly night security guard about to retire from the American Museum of Natural History, hires Larry despite his unpromising résumé. Because of recent financial troubles, the museum plans to replace Cecil and his two colleagues Gus and Reginald with one guard. They advise Larry to leave some of the lights on and warn him not to let anything “in…or out”.

Once night comes, Larry discovers that the exhibits come to life, including a living Tyrannosaurus skeleton nicknamed “Rexy” who behaves like a dog (who fetches one of his ribs); a mischievous capuchin monkey named Dexter which always steals Larry’s keys (and also urinates on him and tears up his instruction manual); rival miniature civilizations led by Old West cowboy Jedediah and Roman general Octavius; an Easter Island Moai (Brad Garrett) who calls Larry “dum-dum” and loves “gum-gum”; and wax models of the likes of Theodore Roosevelt and Attila the Hun, who makes a habit of chasing Larry wildly through the museum with his Huns (like almost catching him in the elevator.)

Roosevelt explains that since an Egyptian artifact—the Golden Tablet of Pharaoh Akhmenrah—came to the museum in 1952, all of the exhibits come to life each night. If the exhibits are outside of the museum during sunrise, however, they turn to dust. Roosevelt helps Larry by restoring order, and he decides to remain as a guard.

On Cecil’s advice, Larry studies history to prepare himself better. He also learns from a museum docent, Rebecca Hutman, who is writing a dissertation on Sacagawea but does not feel she knows enough about her subject.

Larry and Jed
Larry being tied down by Jed.
The next night, Larry uses what he has learned to better control the exhibits (helping solve the Neanderthals’ quest for fire by tossing them a cigarette lighter; giving the Easter Island head a wad of chewing gum (which causes him to blow a big bubble that pops); tricking Dexter with a set of toy keys; and making a truce between the dioramas). However, things go awry when his attempt at winning over Atilla with cheap magic tricks fails, the dioramas continue fighting despite their agreement with Larry, and Dexter is able to steal Larry’s keys again and let out all of the animal exhibits. The Neanderthal then set fire to a display and one turns to dust when he leaves the museum at dawn (his ashes are promptly swept up by a street sweeper). The incident with the Neanderthal display causes the museum director Dr. McPhee to almost fire Larry. Nick in the meanwhile overhears this conversation along with his friends. The same day Larry offers Rebecca a meeting with Sacagawea, but she believes that he is mocking her and the museum, and leaves him.

Larry brings Nick to the museum to show him the exhibits, but none are alive. They investigate and catch Cecil, Gus, and Reginald in the act of stealing the tablet and other valuable objects. Like the exhibits, the guards receive enhanced vitality from the artifact; wishing to retain their health and fund their retirements, the three plan to frame Larry for the thefts, and disabled the tablet to stop the exhibits from interfering. Nick reactivates the tablet, but Cecil locks him and his father in the Egyptian room and flees with the tablet.

Larry releases the Ahkmenrah’s mummy from his sarcophagus. The pharaoh speaks English from many years as an exhibit at Cambridge, and helps Larry and Nick escape. The three find the other exhibits fighting all over the lobby, and Larry convinces them to work together. Although some of the exhibits capture Gus and Reginald without difficulty, Cecil escapes by stagecoach with Larry, Nick, Akmenrah, Jedediah, Octavius, and Atilla the Hun in pursuit in Central Park, where they stop him and regain the tablet. While in a taxicab, Rebecca sees the exhibits return to the museum before sunrise and realizes that Larry was telling the truth; so she enters the museum, and he introduces her to Sacagawea.

Dr. McPhee fires Larry due to the chaos during the night, but rehires him when news reports of the strange events around the museum—such as cave paintings in the museum’s subway station, dinosaur footprints in Central Park, and cavemen sightings—raise attendance. Larry, Nick, and the exhibits celebrate, while Cecil, Gus, and Reginald are forced to become museum janitors to evade being sent to jail for their crimes. As an epilogue Larry uses his invention the snapper to shut off his flashlight.