No678 My All the presidents Men minimal movie poster 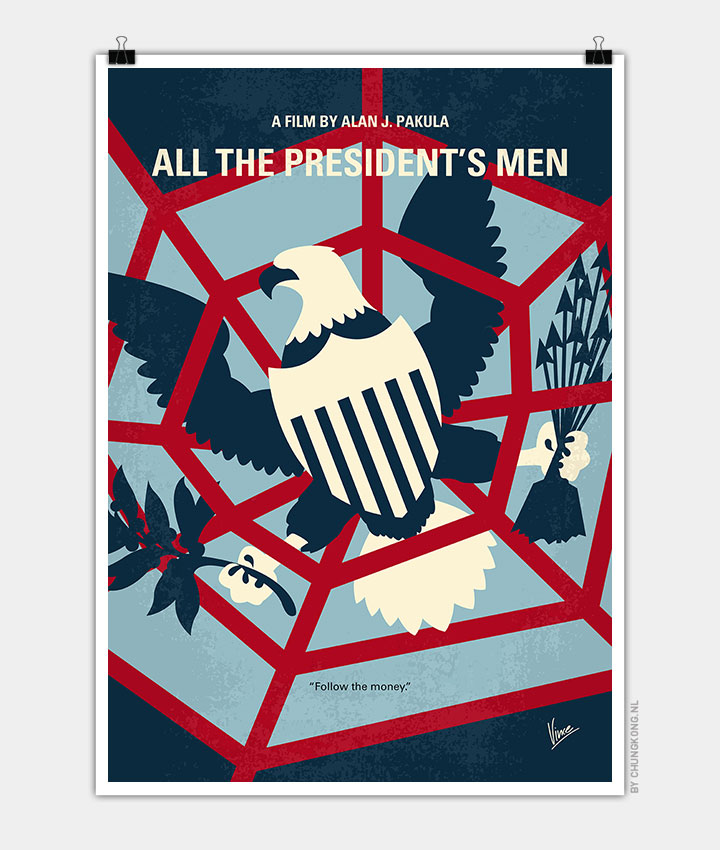 “The Washington Post” reporters Bob Woodward and Carl Bernstein uncover the details of the Watergate scandal that leads to President Richard Nixon’s resignation.

Storyline
On June 17, 1972, the Washington DC police apprehend five men who broke into the National Democratic Party headquarters in the Watergate building. The Washington Post newspaper assigns Bob Woodward, a reporter relatively new to the paper who works the local news desk, to cover the seemingly minor story. When Woodward sees that the five men – primarily Cuban immigrants – have high powered lawyers working for them in the background, he sees a potentially larger story. That’s when a fellow reporter at the newspaper, Carl Bernstein, who is more of a hack who was close to being fired, wants in on the story as well, which Woodward eventually welcomes. One of Woodward’s Washington insider contacts, who is given the code name Deep Throat, implies that the break-in is indeed part of a larger story. Deep Throat will neither confirm or deny information, but will lead Woodward in the right direction if Woodward does get confirmation of information. Deep Throat eventually tells him to “follow the money”, which leads them to uncover that the burglars had moneys in their bank accounts that were originally donated to the Committee to Reelect President Richard Nixon. They have to uncover who controlled the diversion of those funds to see how high up the story goes, which may lead them into the White House itself. Through the process, they have the obstacles of the newspaper’s editor-in-chief Benjamin C. Bradlee who needs their story to be confirmed by reliable source after reliable source to prevent liable, few sources tied to the Committee who will speak to them on the record (their silence which is as telling to Woodward and Bernstein as actual information), and public apathy as no one but them, their newspaper and those to who they speak seem to believe there is a story at all. As they get closer to the truth, there may be those who will do anything to quash the story, all in the name of national security.