No732 My Romancing the Stone minimal movie poster 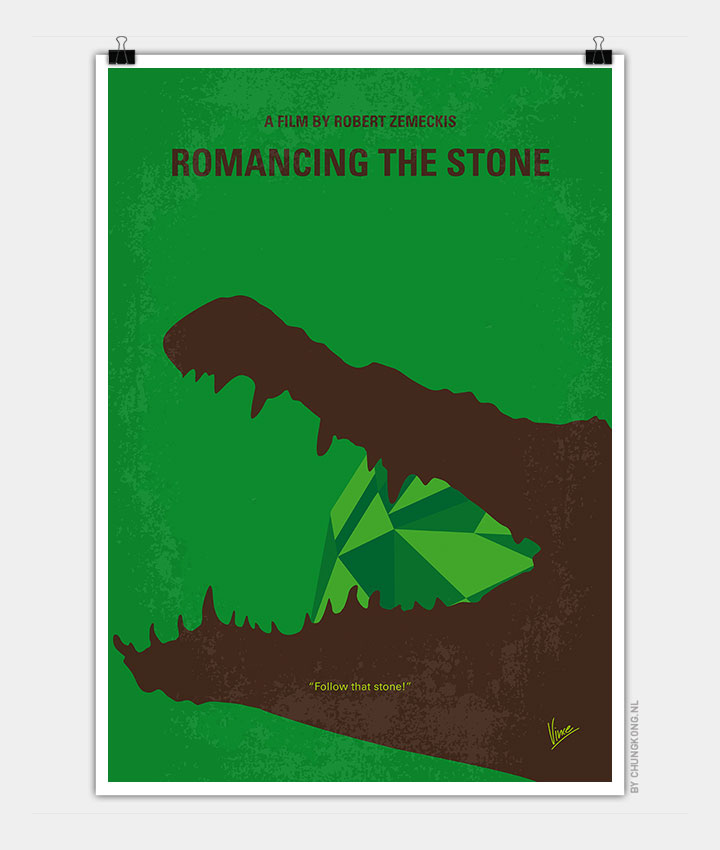 A romance writer sets off to Colombia to ransom her kidnapped sister, and soon finds herself in the middle of a dangerous adventure.

Storyline
New York City based Joan Wilder is a highly successful author of adventure romance novels. She is the polar opposite of Angelina, the heroine in many of her novels. Angelina is a strong, confident woman who uses her sexuality to her advantage and who is swept off her feet by the stories’ hero, a man named Jessie. Joan, on the other hand, is afraid of life. She lives vicariously through her stories, and hopes that there is a real life Jessie who will someday sweep her off her feet. Joan’s world is turned upside down when she receives news from her sister Elaine in Cartegena, Colombia that she has been kidnapped, the ransom being a treasure map which Elaine’s now murdered husband, Eduardo, has since sent to Joan. Unprepared to leave the safety of her New York City apartment, Joan nonetheless travels to Colombia with treasure map in hand to save Elaine. In Colombia, Joan is thrown into the middle of something akin to the adventure part of her novels, not primarily through Cartegena, but inadvertently through the jungles of Colombia. She not only has to face the dangers of the jungle, but Elaine’s captors – American illegal treasure hunters, cousins named Ira and Ralph – a Colombian military policeman named Zolo who, with his private army, is also after the treasure, and a bunch of drug runners who are solely trying to protect their way of life. To Joan’s rescue – for a fee – is Jack Colton, an American in Colombia who has always taken the “fast and easy” way to what he wants in life, which is now enough money to buy a luxury sailboat in which to sail around the world. After Jack learns of the treasure map, he too becomes focused on whatever the unknown treasure – something the cryptic map calls El Corazon – to achieve his goal. Will Jack do whatever he can to get the treasure, even if it ultimately harms Joan and Elaine, or could Jack be Joan’s real life Jessie?