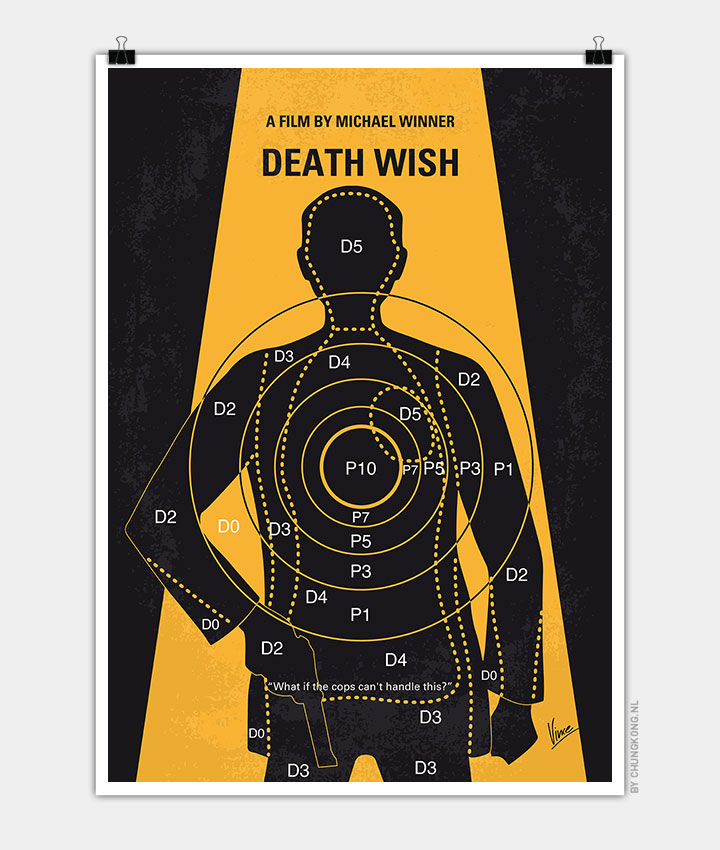 A New York City architect becomes a one-man vigilante squad after his wife is murdered by street punks in which he randomly goes out and kills would-be muggers on the mean streets after dark.

Storyline
Paul Kersey is an architect who served in the Korean War in the medial corps, and he lives in New York City. One day, three street punks posing as grocery delivery boys break into his apartment while he’s not home. At first, they are simply looking for money, but when they find a lack of cash, their intentions turn more sinister, as they batter and physically humiliate Paul’s loved ones, beating up Paul’s wife Joanna and raping his married daughter Carol Toby, and both women are spray-painted “just for fun.” Joanna later dies of her injuries, and Carol is left catatonic. Paul’s life is ripped apart by this. Paul’s boss decides that Paul needs to get out of New York for a while, so he sends Paul to Tucson, Arizona to meet with a client. There, Paul witnesses a mock gunfight at Old Tucson, a reconstructed Western frontier town that is often used as a movie set. Paul’s client, a gun enthusiast, gets Paul interested in guns, and even gives him one. When Paul returns to New York, he brings the gun with him, and when the police are unable to find the rapists, Paul sets out to find the rapists himself. Paul begins patrolling the streets, killing street criminals as he encounters them. While his obsessive search for street justice sickens him at first, Paul begins to enjoy it as Detective Frank Ochoa tries to find the man who is doing the police department’s job for them. The public sees Paul as a hero, and the public feels thankful that someone out there is actually taking a stand against criminals, doing a much better job than the NYPD could ever do. As a result, in Ochoa’s search for Paul, there is a problem: when it comes to public relations, Ochoa and the city government would have a political nightmare on their hands if they actually find Paul.