No749 My The Falcon and the Snowman minimal movie poster 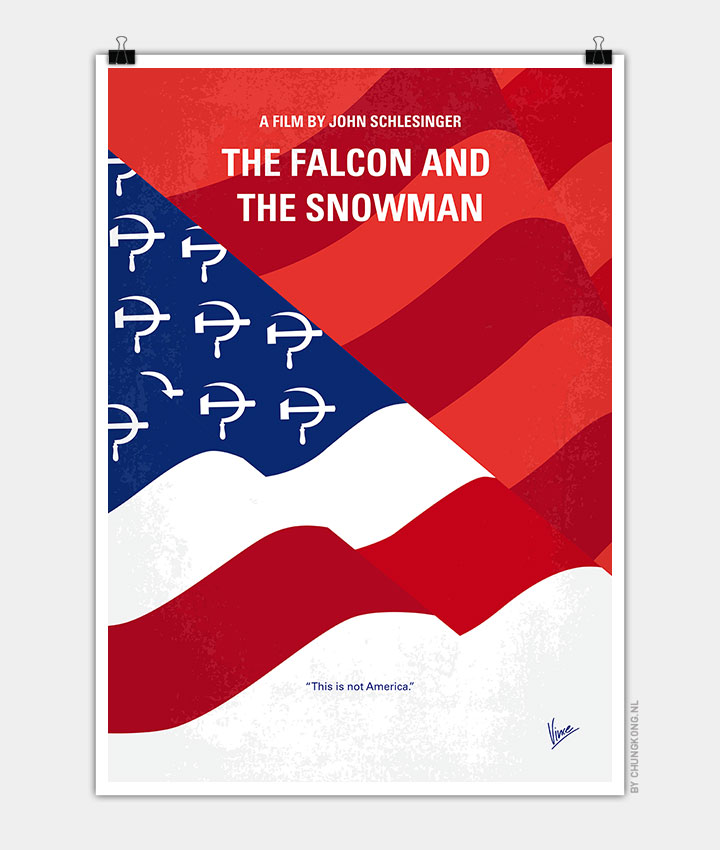 The true story of a disillusioned military contractor employee and his drug pusher childhood friend who became walk-in spies for the Soviet Union.

Director: John Schlesinger
Stars: Timothy Hutton, Sean Penn, Pat Hingle
Storyline 1974. From upper middle class upbringings in southern California, Christopher Boyce and Andrew Lee, who generally goes by his middle name Daulton, have been friends since they were altar boys when they were children. Their continuing friendship, which is now unknown to many who know them especially Chris’ parents, is despite their divergent paths as they became adults, Chris who is seen as the responsible one, Daulton the drug user, drug dealer and drug smuggler with a criminal record. After Chris drops out of seminary school, his ex-FBI father gets him a job at defense contractor RTX. He is quickly promoted from mail boy to a security communications position, RTA who is contracted to receive and transmit secret communiqués for their clients, who include the CIA. He signs a confidentiality agreement, where he is not even allowed to tell anyone outside of the team of what he does. Chris becomes disillusioned with his job and the government when he sees communiqués dealing with CIA activities interfering with foreign governments, including one to overthrow the elected Prime Minister of Australia. He believes that making the information public would not accomplish anything, as witnessed by it being well known that the US supported the overthrow of the elected government in Chile. As such and because he sees security at RTX being lax, he decides to sell secret government information to the Soviet Union. He co-opts Daulton to be his messenger to the Soviet Embassy in Mexico City, Daulton who agrees if only for the possibility of a lucrative paycheck. Chris is well aware that things could go off the rails for him and Daulton since they don’t really know what they’re doing. But in the process, Chris may be unprepared for Daulton’s volatility in the matter, he who is fueled more by greed and his drug use, and the fact that other governments may be as corrupt as he sees the US government to be.