No753 My Manchester by the Sea minimal movie poster 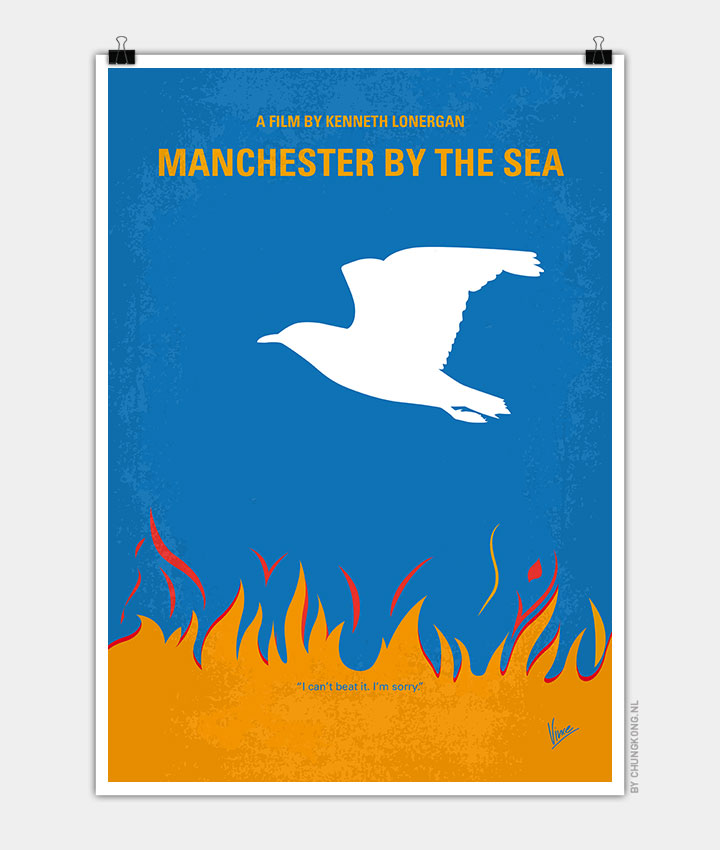 An uncle is asked to take care of his teenage nephew after the boy’s father dies.

Storyline
Lee Chandler, who works as a janitor for a property management company responsible for four residential apartment buildings in Quincy, Massachusetts, is an angry, sullen and antisocial man. His demeanor and retreat from life are primarily because of a single incident which led to him leaving his hometown of Manchester-by-the-Sea upstate – his name being infamous in the region by those that don’t know him because of that incident – and the break-up of his marriage to his now ex-wife, Randi. The only time Lee ever returns to Manchester is when he receives a telephone call from his fisherman brother, Joe Chandler, who was diagnosed a few years ago with congestive heart failure. Whenever now divorced Joe ends up on an extended stay in the hospital due to his health problems, Lee returns to Manchester to take care of Joe’s son, Patrick Chandler, of whom Joe has sole custody. With the latest such telephone call and Lee’s subsequent trip to Manchester, Joe dies before Lee makes it to the hospital in nearby Beverly. In what Lee assumes is his temporary guardianship of now sixteen year old Patrick becomes legally permanent when he learns, much to his surprise, that Joe has Lee listed in his will not only as Patrick permanent guardian, but that Lee is to be the trustee for the estate on Patrick’s behalf until Patrick becomes of age, Patrick who is the sole beneficiary. Patrick, a typical teenager, is arguably closest to Lee emotionally than any other adult.

Despite his father’s death, Patrick is still more concerned about maintaining his life as is: hanging out with his friends, including his two girlfriends (who don’t know about the other) and his band-mates, playing ice hockey, and keeping Joe’s slowly deteriorating fishing boat (which Patrick sees as his father’s legacy) which is financially unfeasible to do. To Patrick, all this means Lee moving back to Manchester as opposed to Patrick moving to Quincy, where Lee only has a one room apartment as part of his job anyway. Lee is not only not equipped to be Patrick’s guardian, but is not emotionally prepared to return to Manchester, the site of the “incident” and where Randi still lives, she who he has not spoken to since their divorce. With no other real options as to a guardian for Patrick – including their close friend George who is anticipating being an empty nester soon, and Patrick’s alcoholic mother Elise whose whereabouts are unknown anyway – Lee has to decide what is best to do for Patrick, which takes into account his own emotional well-being.