No767 My Snowpiercer minimal movie poster 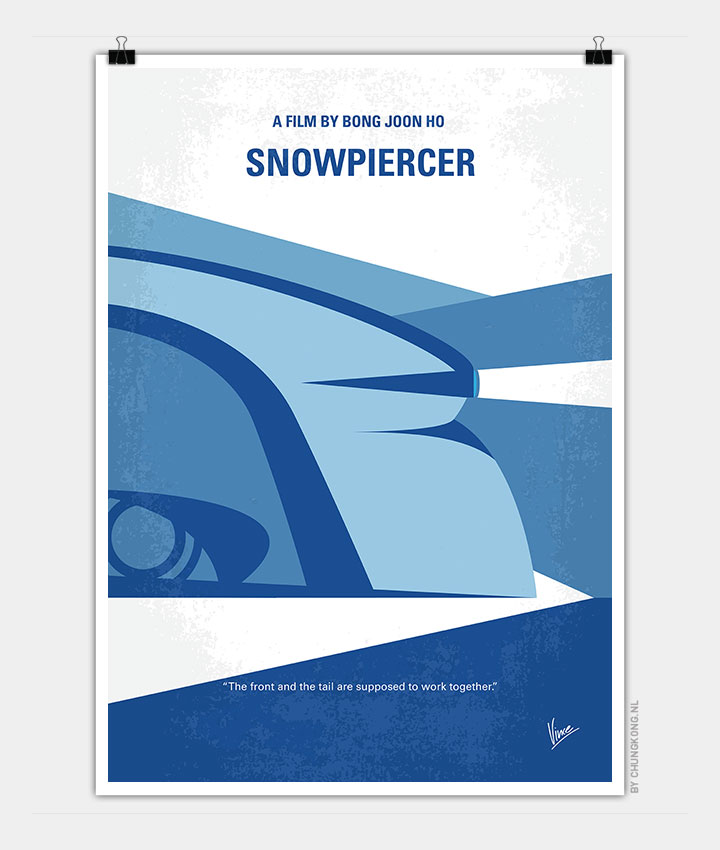 Set in a future where a failed climate-change experiment kills all life on the planet except for a lucky few who boarded the Snowpiercer, a train that travels around the globe, where a class system emerges.

Storyline
It’s 2031, seventeen years after authorities in seventy-nine countries decided collectively to combat global warming with the coolant CW-7. The result was the Earth being immediately sent into a deep freeze, killing all human life except a handful who now live on a proverbial “ark”, a revolutionary train built before 2014 by a train aficionado named Wilford, the train which at that time was considered useless and self-indulgent.

The train is required to be constantly moving to generate energy for life inside, it which circumnavigates the globe on a single continuous track once every year. The train is still controlled in all its aspects by Wilford, who has created three separate classes housed in different parts of the train: the privileged “one percent” who are at the front of the train, the workers who support both ends and occupy the middle of the train, and the “tail people”, the masses who live at the back of the train like cattle in a windowless cattle car, they being solely fed protein bars, whose ingredients the tail people do not know. The face of Wilford’s ideology to those in the tail end is Minister Mason, as Wilford never ventures to that end of the train. Some of the policies which Wilford has implemented is taking many of the children from the tail end for an unknown purpose never to be seen by the people in the tail end again, and committing occasional indiscriminate genocide in the tail end, most of the tail people believing as a method of population control and to demonstrate his dictatorial power in an effort to have a complacent populace among the masses. There have been many attempts of revolution by the tail people in the past, all quashed by Wilford.

Curtis, one of the tail people, wants to attempt another revolution, he believing all past attempts having failed because they have focused on Wilford as opposed to what he feels needs to occur for power: take control of the engine at the front. Supporting Curtis in this fight are among others: Gilliam, the wise old man; Edgar, who Curtis took under his wing when he became orphaned in the early years; and Tanya and Andrew, who want to find their children taken away. Along the way, they have to co-opt Namgoong Minsoo, an addict of a synthetic hallucinogen called Kronole, he who designed the security system, namely the locking mechanism of the gates between all the train cars. As Curtis and his team try to work their way from car to car from the tail to the front, their priorities are influenced by what they see, what they learn and by revelations including secrets from their individual pasts.