No768 My Falling Down minimal movie poster 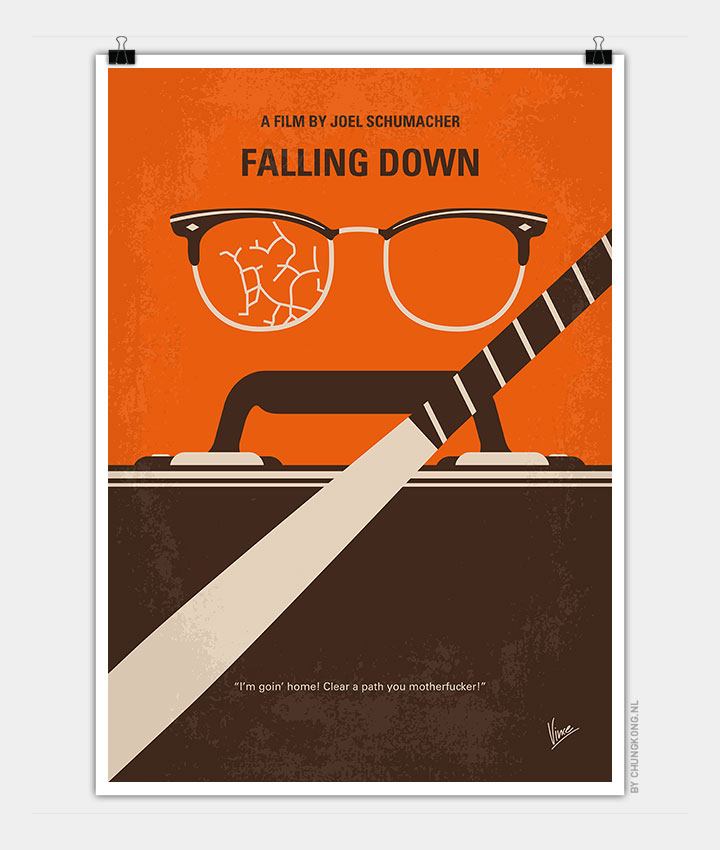 A borderline personality disordered defense worker frustrated with the various flaws he sees in society, begins to psychotically and violently lash out against them.

Director: Joel Schumacher
Stars: Michael Douglas, Robert Duvall, Barbara Hershey
Storyline On the day of his daughter’s (Joey Hope Singer) birthday, William “D-Fens” Foster (Michael Douglas) is trying to get to his estranged ex-wife’s (Barbara Hershey) house to see his daughter. He has a breakdown and leaves his car in a traffic jam in Los Angeles and decides to walk. Along the way he stops at a convenience store and tries to get some change for a phone call but the owner, Mister Lee (Michael Paul Chan), does not give him change. This destabilizes William who then breaks apart the shop with a baseball bat and goes to an isolated place to drink a coke. Two gangsters (Agustin Rodriguez & Eddie Frias) threaten him and he reacts by hitting them with the bat. D-FENS continues walking and stops at a phone booth. The gangsters hunt him down with their gang and shoot at him but crash their car. William goes nuts and takes their gym bag with weapons proceeding in his journey of rage against injustice. Meanwhile Sergeant Martin Prendergast (Robert Duvall), who is working on his last day before retirement, is following the wave of crimes and believes that the same man is responsible but the other detectives do not pay attention to him.