No773 My Land of the Lost minimal movie poster 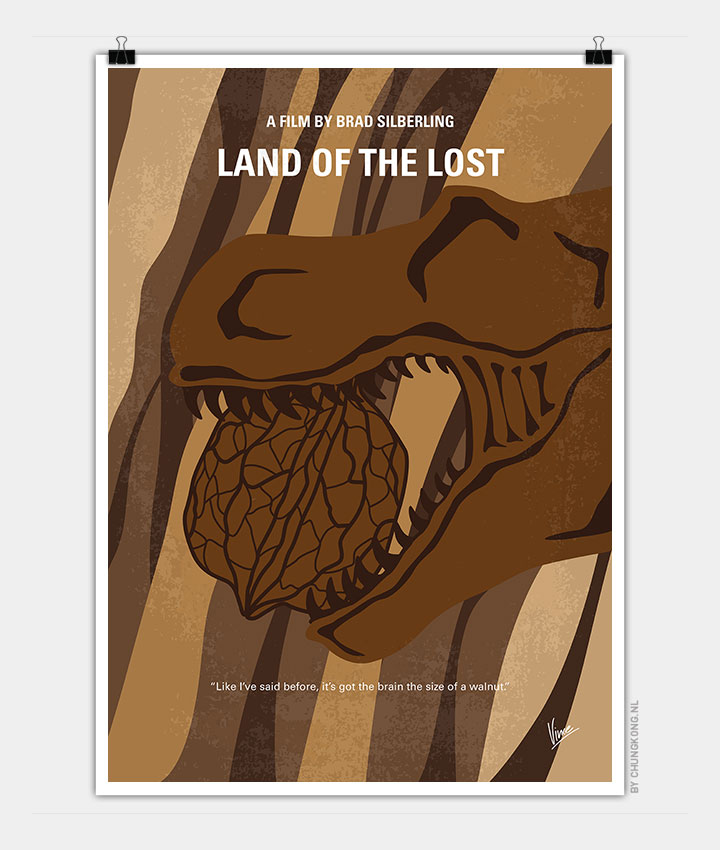 On his latest expedition, Dr. Rick Marshall is sucked into a space-time vortex alongside his research assistant and a redneck survivalist. In this alternate universe, the trio make friends with a primate named Chaka, their only ally in a world full of dinosaurs and other fantastic creatures.

Storyline
Bombastic paleontologist Dr. Rick Marshall’s career went spiraling downward when it became well known his controversial views on using tachyon energy as time warps as a means to solve the world’s energy problems by transporting fuel from the past, future or even parallel universes.

The only person supporting his theories is Cambridge science student Holly Cantrell, who was forced out of the institution for her views. The reason for her views is that she has discovered in the same desert area an ancient artifact that has a modern lighter imprinted on it and crystals with pure tachyon energy, meaning in her mind that someone from the present must have transported it from wherever that parallel universe. Rick knows that he has to continue his work in this area when he discovers the imprint is of his own lighter. Rick and Holly take Rick’s still in-development tachyon amplifier to the desert area where the artifacts were found, and in the process the two plus Will Stanton, the redneck operator of a roadside attraction, fall through a portal to that parallel universe. Their problem is that they lose track of the amplifier and have no way of getting back to the present. They not only have to get the amplifier, but they have to deal with the multitude of dangers that lurk in the new world into which they’ve entered, including a race of lizard men called Sleestak, and a number of different dinosaurs, the most dangerous perhaps being a tyrannosauruses rex they nicknamed Grumpy for his grumpy demeanor.

But not all the creatures in this new world are dangerous, as shown by Cha-Ka, a young Pakuni – a race of primates in-between monkeys and humans – who has been separated from his tribe, who they befriend, and who may be able to shed some light on their plight.