No774 My The Life Aquatic with Steve Zissou minimal movie poster 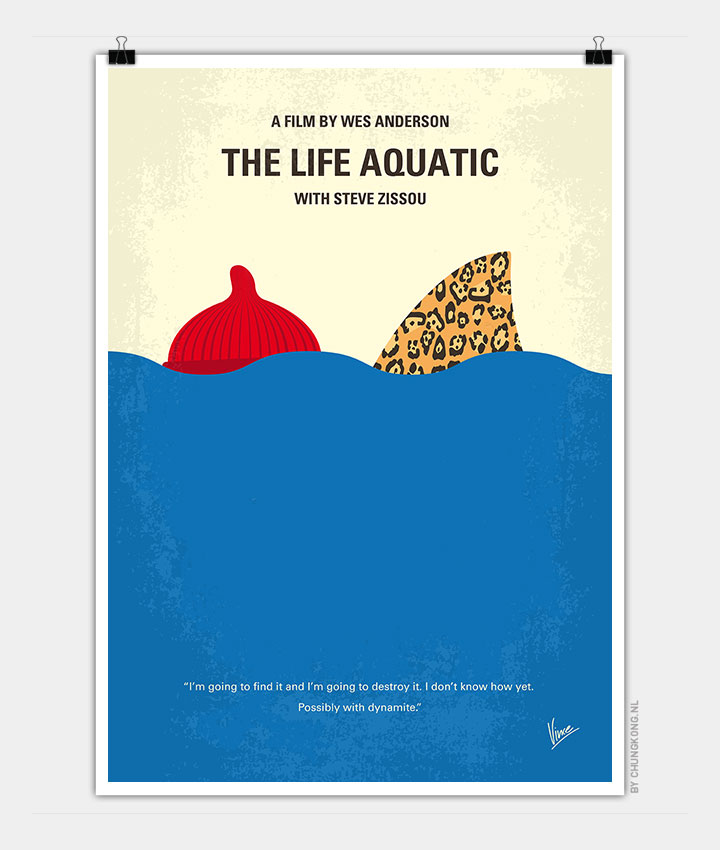 With a plan to exact revenge on a mythical shark that killed his partner, oceanographer Steve Zissou rallies a crew that includes his estranged wife, a journalist, and a man who may or may not be his son.

Storyline
Fifty-three year old Steve Zissou is a famed oceanographer and documentarian, this work which he does with his loyal crew known as Team Zissou. His career, however, has been going downhill, he not having had a hit movie in the last nine years, which is making him think his next film will be his last, something he has not confirmed publicly. He has just released part 1 of that film, “The Jaguar Shark”. The title derived from an incident on what was his most ambitious expedition to date, where his professional partner and best friend of twenty-seven years, Esteban du Plantier, was eaten alive by a 10 meter long creature which Steve had never seen before but what he refers to as a jaguar shark. Because only Steve saw the creature and what happened to Esteban, some question if the creature truly exists and if Steve is making up the story. Pescespada Island.

Regardless, Steve plans as part 2 of the documentary finding and destroying the creature that killed his friend. Three people who have never sailed with Steve will be joining the Team on this expedition with the Belafonte: Bill Ubell, his bond company’s “stooge”; single but pregnant reporter Jane Winslett-Richardson, whose presence is important if only because Steve does care what the world thinks about him, despite often doing unlikable things; and Ned Plimpton, who works as a pilot for a backwater airline, and who the two believe may be Steve’s biological son from a previous relationship.

Despite Ned acknowledging that he is not a strong swimmer, he accepts Steve’s offer to be an official member of the Team, which does not sit well with Team engineer Klaus Daimler, who has always viewed himself as the son Steve never had. One Team member who will not be going along is Steve’s wife, Eleanor Zissou, who Steve refers to as a “rich bitch”, who was once married to Steve’s arch oceanography nemesis Alistair Hennessey, and who Steve will admit off the record is the true brains behind the operation. She views this expedition as reckless. Steve being able to focus on the mission at hand takes some turns based on other hazards of the sea, and the interactions between Steve, Ned and Jane, which adds complexity to their confined environment.