No779 My The Social Network minimal movie poster 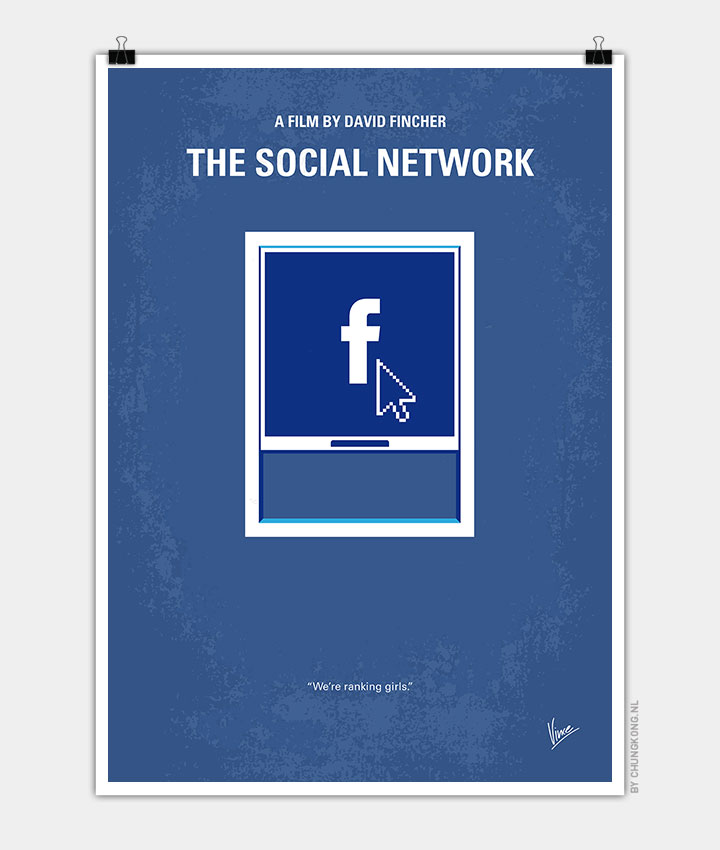 Harvard student Mark Zuckerberg creates the social networking site that would become known as Facebook, but is later sued by two brothers who claimed he stole their idea, and the co-founder who was later squeezed out of the business.

Storyline
As told through flashbacks via deposition hearings for two concurrent lawsuits, the development and early days of the social networking website Facebook is presented. Harvard students Mark Zuckerberg and Eduardo Saverin – officially listed as the co-founders of the website – were once best friends. Based on an on-line blog about his ex-girlfriend and a site he developed allowing its users to rate the hotness factor of girls on campus, Zuckerberg, who exhibited a streak of arrogance, was asked by fellow Harvardites, wealthy twins Cameron Winklevoss and Tyler Winklevoss, and their friend Divya Narendra, to enter into an agreement to develop a social networking website specifically for Harvard students, the attraction for people to visit it being its exclusivity solely to Harvard students. Zuckerberg agreed. Zuckerberg, with financing from his friend Saverin, decided instead to develop his own website without telling the “Winklevi” (as he calls the twins) and Narenda. Zuckerberg’s assertion was that he never used a line of code provided by the three in his work.

As “thefacebook” as it was then called began to blossom, the twins and Narenda had to figure out what to do to regain what they believed their intellectual property without having to sue, since that’s not what gentlemanly Harvardites do. As the site was brought to more and more university campuses, Zuckerberg and Saverin began to have a difference of opinion: Saverin wanted to sell ad space to generate revenue (as he had been the website’s sole financier and he had profit mentality based on being an economics major), while Zuckerberg, never one interested in money, didn’t want to go that route as the ads would make the site lose its “cool” factor, which made it popular. The site attracted the attention of the founder of Napster, Sean Parker, whose own dot com life had its spectacular ups and spectacular downs. As Parker ingratiated himself into Facebook’s life (much to Saverin’s chagrin) and as Zuckerberg began increasingly to side with Parker, Saverin slowly began to be phased out of both Zuckerberg’s personal and professional life.