No790 My Edge of Tomorrow minimal movie poster 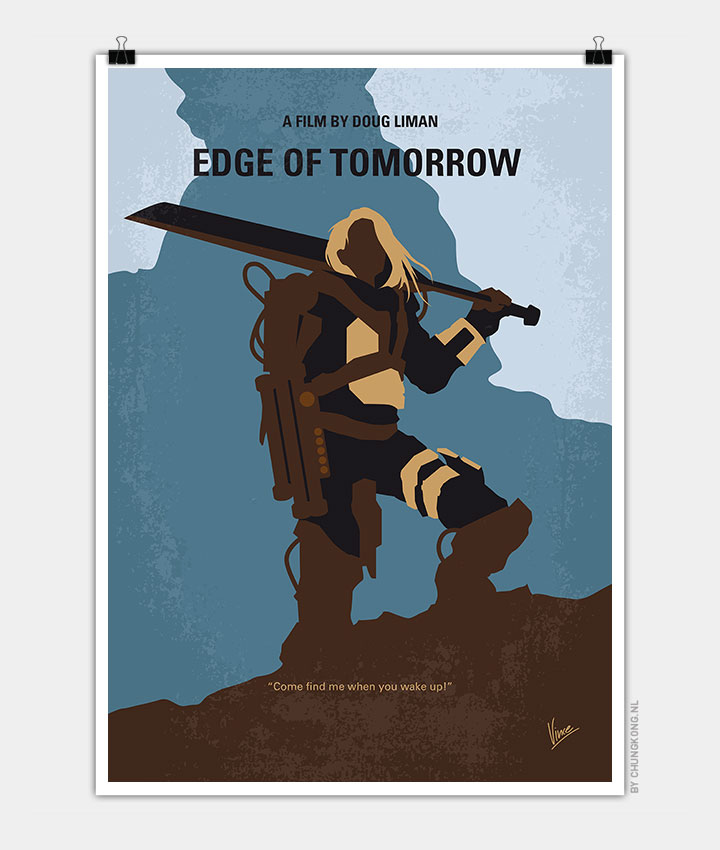 A soldier fighting aliens gets to relive the same day over and over again, the day restarting every time he dies.

Storyline
The planet is invaded by aliens called Mimics. They have almost devastated the planet. But when they win a battle at Verdun, the Earth forces believe they have a chance at victory. So a major op is planned, and all soldiers are called in. William Cage, a Major in the Army who never saw any combat is asked to join. But refuses and even threatens his CO who in turn strips him of his rank and sends him to join a unit. They think that victory is in their grasp but the Mimics attack them before they could, killing them all. Cage manages to kill one of them before he dies but wakes up the day before. He tries to tell everyone what he knows but they don’t believe him and when he dies he wakes up the day before again. He keeps on trying to warn them but to no avail. He notices Rita Vrataski, the hero of Verdun and tries to tell her what’s happening to him. She tells him to see her when he wakes up, which he does. She tells him that the reason they won at Verdun is because the same thing happened to her. She killed a Mimic and it’s blood entered her body and she would relive the day before and used her experience to beat the Mimics.

Along with a scientist, they tell Cage that the Mimics are being led by something they call the Omega and the one he killed whose blood entered his body is what they call an Alpha who can relive the day when killed. They believe if they can locate the Omega and kill it they can beat the Mimics once and for all. So they tell Cage that the Alpha has some kind of link to the Omega so they believe Cage can see where the Omega is. But Vrataski lost the ability before she could find the Omega. Eventually Cage thinks he knows where the Omega is but to get to the Omega they have to survive the battle wherein they were all killed but no matter how much Cage warns her they always get killed. So they have to find another way to get to the Omega. Vrataski also warns Cage that if he gets wounded that he should kill himself because if he’s wounded and gets a blood transfusion, he will lose the ability to relive the day, because that’s what happened to Vrataski.