No844 My To Kill a Mockingbird minimal movie poster 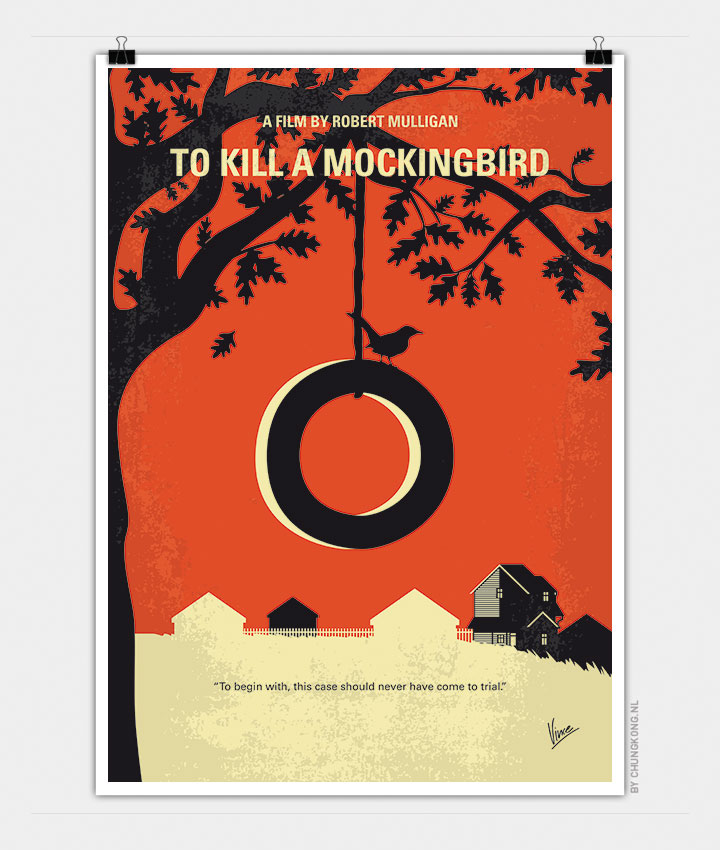 Atticus Finch, a lawyer in the Depression-era South, defends a black man against an undeserved rape charge, and his children against prejudice.

Storyline
Through the eyes of “Scout,” a feisty six-year-old tomboy, TO KILL A MOCKINGBIRD carries us on an odyssey through the fires of prejudice and injustice in 1932 Alabama. Presenting her tale first as a sweetly lulling reminiscence of events from her childhood, the narrator draws us near with stories of daring neighborhood exploits by her, her brother “Jem,” and their friend “Dill.” Peopled with a cast of eccentrics, Maycomb, a “tired and sleepy town” modeled after Lee’s native Monroeville, finds itself as the venue of the trial of Tom Robinson, a young black man falsely accused of raping an ignorant white woman.

Atticus Finch, Scout and Jem’s widowed father and deeply principled man, is appointed to defend Tom for whom a guilty verdict from an all-white jury is a foregone conclusion. Juxtaposed against the story of the trial, is the children’s hit and run relationship with Boo Radley, a shut-in whom the children, and Dill’s Aunt Rachel, suspect of insanity, and whom no one has seen in recent history. Cigar-box treasures, found in the knot hole of a tree near the ramshackle Radley house, temper the children’s judgment of Boo. “You never know someone,” Atticus tells Scout, “until you step inside their skin and walk around a little.” But fear keeps them at a distance until one night, in streetlight and shadows, the children confront an evil born of ignorance and blind hatred, and must somehow find their way home.