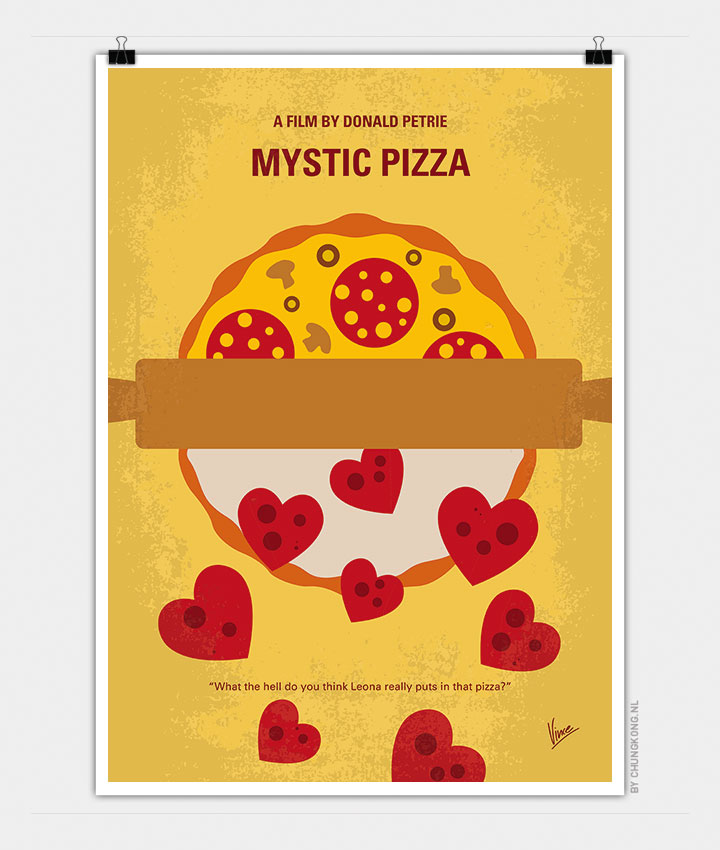 Three teenage girls come of age while working at a pizza parlor in the Connecticut town of Mystic.

Storyline
Jojo Barbosa and sisters Kat and Daisy Arujo have hung out together within their Portuguese-American working class community since they were kids in their coastal hometown of Mystic, Connecticut. They still are best friends, working together at the local pizza joint, Mystic Pizza, owned by their mentor, Leona, who arguably makes the best pizza in the area, the secret recipe for the sauce which has long been passed down in her family and which she will not divulge to anyone until it’s time to pass on the reigns to whoever will operate the joint after her time. Despite her pizza being the best, Mystic Pizza needs a more consistent clientele than the just the locals and summer tourists to survive.

Jojo, Kat and Daisy believe that a favorable review by the Fireside Gourmet, Hector Freshette, will do the trick, but even if they can convince him to come, Leona will not kowtow to him, he who she believes is a pompous ass. The three young women have a different history in their romantic life. Jojo is engaged to her longtime boyfriend, fisherman Bill Montijo, but she is having second thoughts about marrying him despite she knowing that she does love him, especially sexually. Kat and Daisy are polar opposites. While Daisy flaunts her sexuality which attracts the eye of many of the working class townies, Kat has focused her life on her studies, she who is working several jobs to pay for her upcoming first year’s tuition in the Astronomy program at Yale. They may experience a little of the other’s life with their latest encounters.

Daisy has attracted the attention of wealthy Charles Gordon Windsor, Jr., a preppy who is regardless having a difficult time trying to find his own place in life following his expulsion from law school. And Kat’s latest temporary job is sitting for Phoebe, the four year old daughter of architect Tim Travers and his wife Nicole, until Nicole returns from her overseas trip in a couple of weeks. Kat admits that she is starting to fall for the entire package that is Tim, especially after she finds out that his and Nicole’s marriage is on the rocks. The question becomes whether there is a happily ever after or at least happily for now relationship for any of Jojo, Kat or Daisy.