No848 My Less Than Zero minimal movie poster 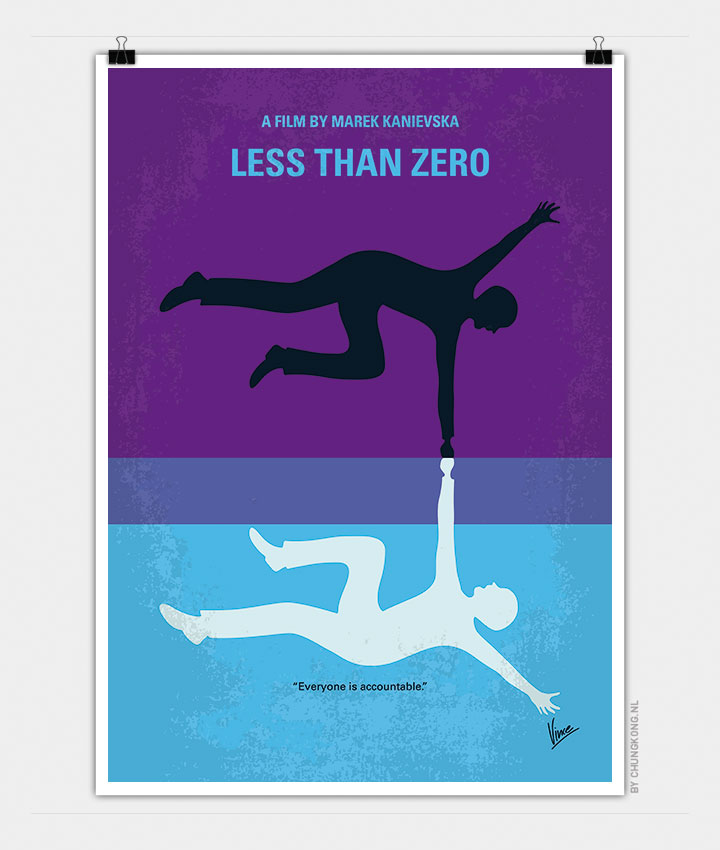 A college freshman returns to L.A. for the holidays at his ex-girlfriend’s request, but discovers that his former best friend has an out-of-control drug habit.

Storyline
Clay Easton (Andrew McCarthy) is a straitlaced college freshman on the east coast, who returns home to Los Angeles, California, for Christmas to find things very different from the way he left them. His high school girlfriend, Blair (Jami Gertz), has become addicted to drugs and has been having sex with his high school best friend, Julian Wells (Robert Downey, Jr.). Julian, whose life has gone downhill after his startup record company falls apart, has become a drug addict. He’s also been cut off by his family for stealing to support his habit and reduced to homelessness. Julian is also being hassled by his dealer, an old classmate named Rip (James Spader), for a debt of $50,000 that he owes to him. Clay’s relationship with Blair rekindles and Julian’s behavior becomes more volatile. His addiction is worsening and since he does not have the money to pay off his debt, Rip forces him to become a prostitute to work off the debt. After suffering through a night of being sick from not being able to score drugs and hiding from Rip, Julian decides to quit and begs his father (Nicholas Pryor) to help him. He then tells Rip the next day his plans for sobriety, which Rip does not believe; Rip lures Julian back into doing drugs and hooking. Clay finds Julian and rescues him; after a violent confrontation with Rip and his henchman, Clay, Julian and Blair all escape and begin the long drive to the desert so Julian can attempt to achieve sobriety once and for all.

However, the damage has already been done; the next morning Julian dies from heart failure in the car. After Julian’s funeral, Clay and Blair are sitting on a cemetery bench reminiscing about him. Clay then tells Blair he is going back east and wants her to go with him, to which she agrees. We see the snapshot of the three of them at graduation-the last time all three of them were ever happy together.