No868 My Stranger than fiction minimal movie poster 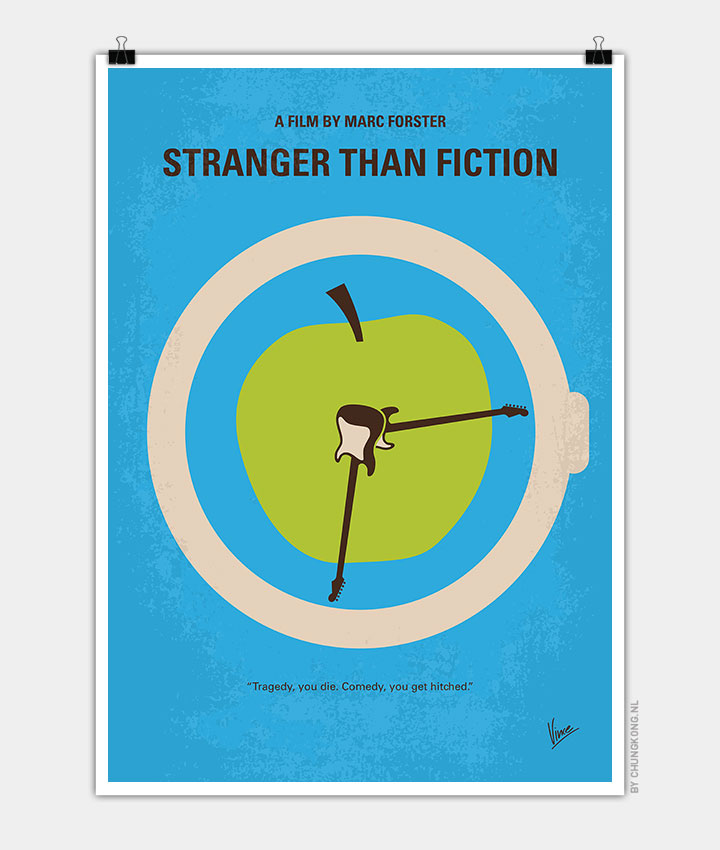 An I.R.S. auditor suddenly finds himself the subject of narration only he can hear: narration that begins to affect his entire life, from his work, to his love-interest, to his death.

Storyline
Harold Crick, an IRS agent, leads a highly regimented, routinized and solitary life, having few friends besides his co-worker Dave. Suffering from OCD, he has a habit of counting things, like the number of times he brushes each tooth, and the number of steps it takes to get to the bus stop for his daily commute. Because of these issues, he is highly dependent upon his watch, to which he refers often but which he otherwise does not consciously consider. Despite his nature, he hates his job. One day while he is brushing his teeth, he hears the bodiless voice of a British woman eloquently narrating what seems to be his story as he is acting it out. The story not only includes his actions, but what his innermost thoughts and feelings are at the time.

The voice comes and goes over time, Harold not knowing the full story based on the missing parts. Not knowing what to do, he brushes the voice aside until the voice says, “little did he know… would result in his imminent death”. Knowing that he is not schizophrenic which is the medical diagnosis, Harold turns to literature professor, Jules Hilbert, who becomes Harold’s sole confidante in the matter. Hilbert agrees to help him through the literary side of the matter, solely because the voice used the literary convention of “little did he know”.

Trying to go against the normal in his life partly based on Hilbert’s advice, Harold begins to court Ana Pascal, a baker who he is auditing, who detests the very thought of him, but about who he nonetheless cannot stop thinking. In reality, the voice in question belongs to famed novelist, chain smoking and nervous Karen Eiffel, who is under great pressure from her publisher as she has not written anything in ten years due to writer’s block. Her books always end with the lead character dying. Harold’s story is slowly coming together, but she has not yet worked out how he will die. Harold’s fate seems to be in Karen’s typing hands, as his story plays out exactly when she types it out. The primary questions then become if Hilbert and Harold can find out that it is Karen writing the story, if so if Harold can locate her, if so if Karen will believe his story, and if so if she will change her artistic vision to save Harold’s life… or conversely if the fate between Karen’s typewriter and Harold’s life can somehow otherwise be broken.