No884 My Easy A minimal movie poster 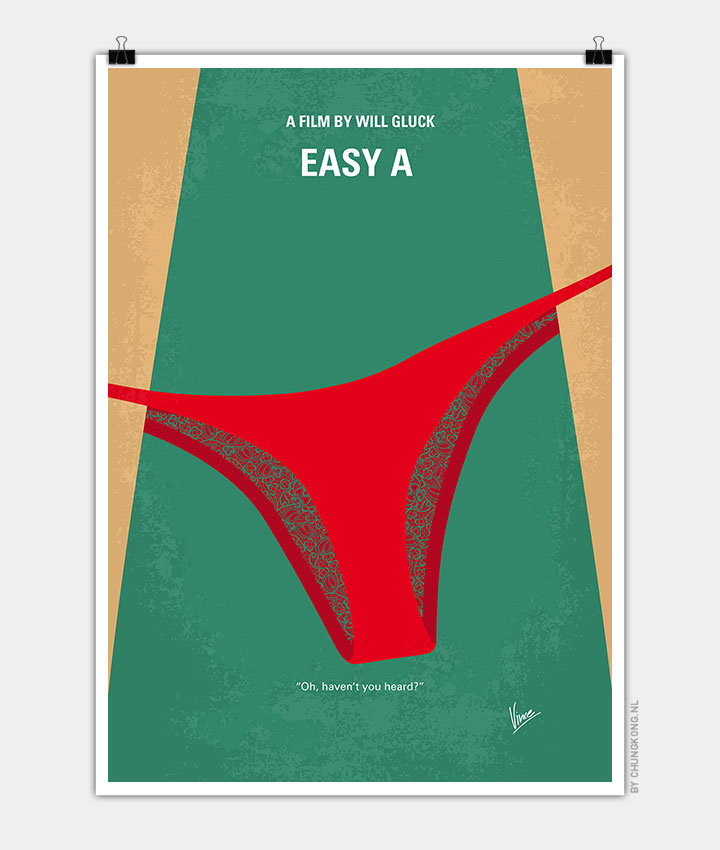 A clean-cut high school student relies on the school’s rumor mill to advance her social and financial standing.

Storyline
In California, the virgin student Olive Penderghast feels anonymous in the high school where she studies. When her best friend Rhiannon invites her to spend the weekend with her family, Olive lies and tells that she will have a date with a nonexistent community college student. On the next Monday, Rhiannon goes to the bathroom with Olive and asks how her encounter was and Olive lies, telling that she lost her virginity in the weekend with her fictitious boyfriend.

However, one school mate overhears their conversation and spreads the rumor about Olive’s promiscuity. The religious fanatic Marianne blames her and out of the blue. Olive becomes a notorious student. Meanwhile, Olive is studying “The Scarlet Letter” in the English class and she identifies herself like Hester Prynne, the woman condemned by her Puritan neighbors in Nathaniel Hawthorne’s novel. Olive discloses the truth to her bullied gay friend Brandon and suggests him to also lie that he had slept with a girl. Brandon asks Olive to help him and she pretends to have sex with him in a party. Then other outcast boys offer to pay Olive to improve their images while Olive’s reputation degrades. When Olive loses control of the situation, she needs to take an attitude to revert it.