No886 My Say Anything minimal movie poster 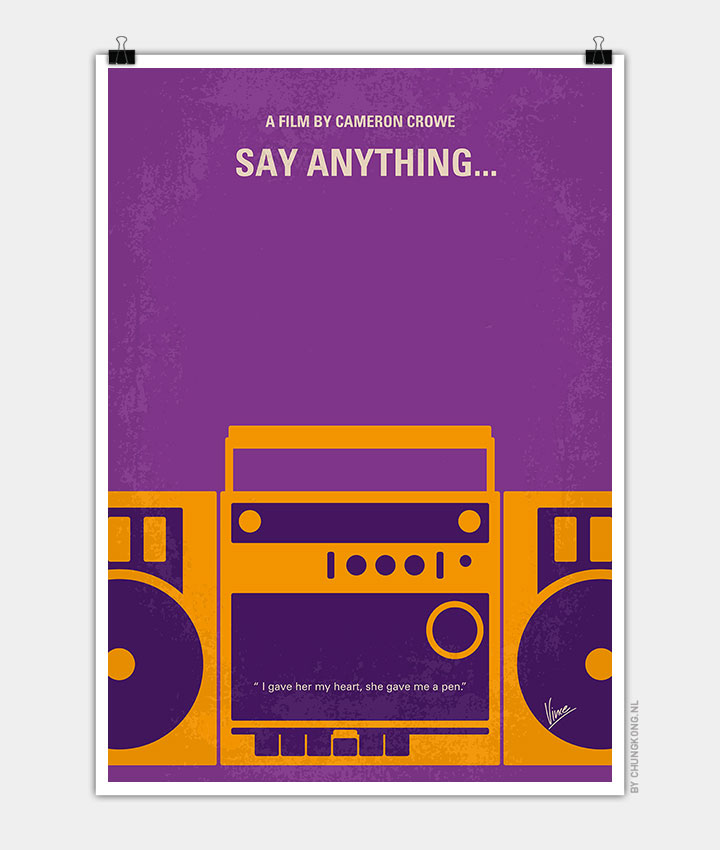 A noble underachiever and a beautiful valedictorian fall in love the summer before she goes off to college.

Storyline
Diane Court and Lloyd Dobler have just graduated from Lakewood High School in Seattle. Overachieving Diane, who probably does not realize how beautiful she is, was the class valedictorian. She strives for excellence in everything she does as a natural course, resulting in not having a social life, although she could probably get any boy she wanted despite feeling socially awkward herself. She lives with her divorced father, Jim Court, who owns a nursing home, who dotes on Diane and who does whatever he needs to validate her being the best. Diane receiving a prestigious fellowship to study in England in the fall is just the latest validation that she indeed is at the top of the pyramid. An army brat, Lloyd recently returned to the US to finish high school, he now living with his single mother sister Constance while their parents remain stationed in Germany. Lloyd, who does kick-boxing as a hobby, has no career aspirations, only knowing that he wants to do something great. His only short term aspiration is to date Diane, despite the improbability, it generally seen that she is out of his league. With the fellowship in hand, Diane lets her social guard down for the first time in her life in accepting Lloyd’s offer of a date, despite she not even knowing who he is. Following that date, Lloyd wants to spend as much time with Diane in the next sixteen weeks before she leaves. Diane, who likes Lloyd and who finds that she now regrets not having that social life with her high school colleagues, has to decide if Lloyd does fit into her life at this crucial time just before she is about to leave. What happens is also dependent on her father, not only in he perhaps seeing any boy, but even more one like Lloyd who does not have the same future outlook as he has for Diane being merely a distraction, but something that happens in his own life. Lloyd figuring out what that something great as something to do may also factor into what happens.