No893 My A Futile and Stupid Gesture minimal movie poster 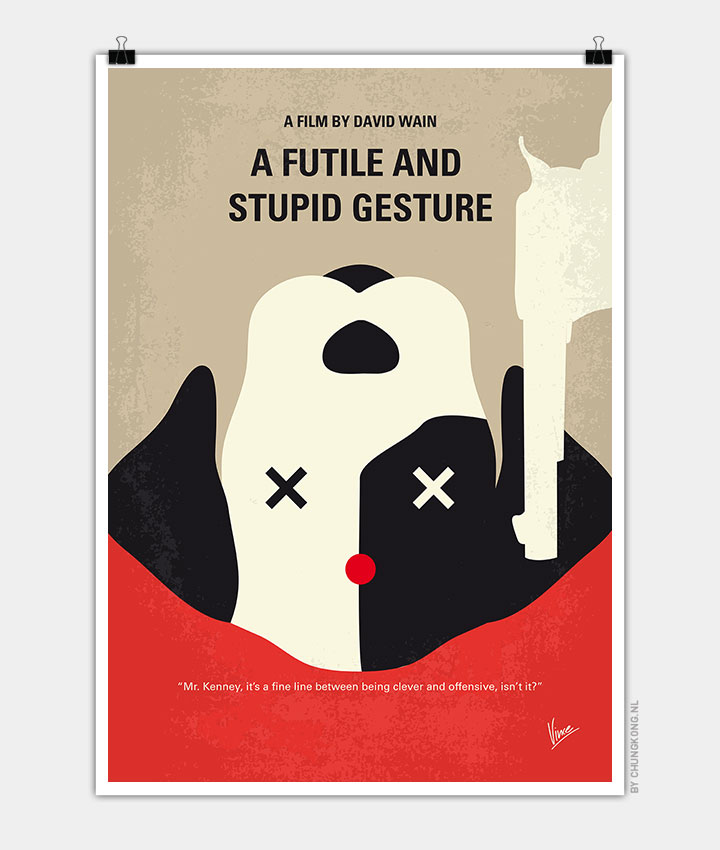 In the 1970s and ’80s, National Lampoon’s success and influence creates a new media empire overseen in part by the brilliant and troubled Doug Kenney.

Storyline
The story of Doug Kenney, the co-founder of National Lampoon magazine and the writer of seminal films like Animal House and Caddyshack, is one that might be unfamiliar to a casual comedy fan. Here was someone who laid the groundwork for so many of America’s legendary satirists, particularly the early stars of Saturday Night Live, but who has been somewhat forgotten in the intervening decades. David Wain’s movie A Futile and Stupid Gesture, out Friday on Netflix, tries to address that by offering a crash course in Kenney’s influence, laying out every important part of the man’s short but vital career onscreen in madcap biopic form. Unfortunately, he doesn’t provide much more information than you would have gleaned from reading this paragraph.

Kenney (played by Will Forte) went to Harvard, where he edited The Harvard Lampoon and wrote the parody book Bored of the Rings with his friend Henry Beard (Domhnall Gleeson). Together, they launched the National Lampoon in 1970, which offered darker, more anarchic satire than existing favorites like Mad magazine and shaped the comedy generation that followed. Kenney’s first film-writing credit, Animal House in 1978, was a colossal success; Caddyshack, released in 1980, was another hit. Wain takes us through the highlights of Kenney’s career, having an ensemble of lovable modern-day comedians play veterans like Bill Murray, Chevy Chase, and Gilda Radner, who all worked with Kenney at some point.