No919 My They Live minimal movie poster 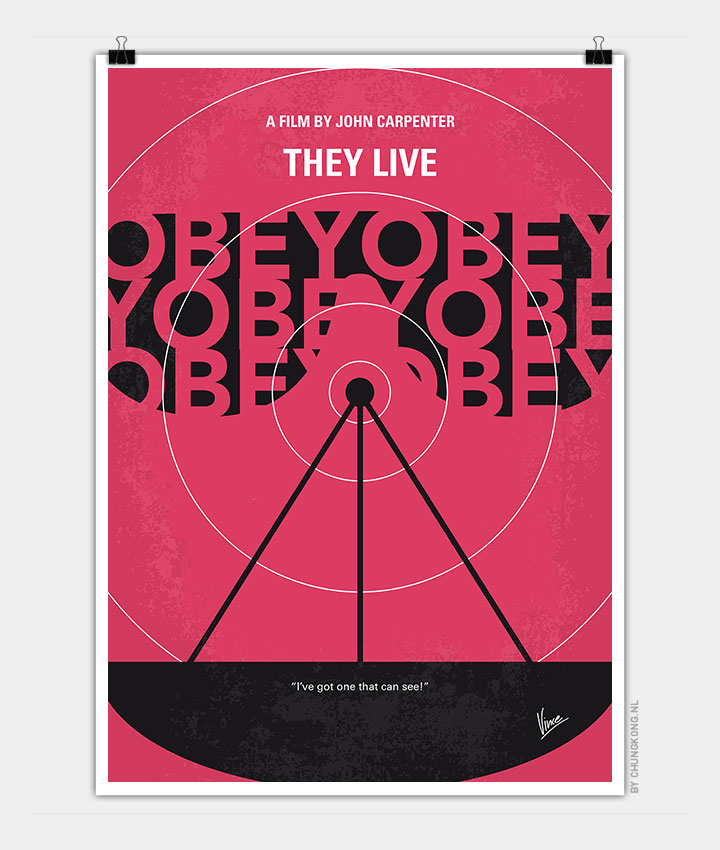 A drifter discovers a pair of sunglasses that allow him to wake up to the fact that aliens have taken over the Earth.

Storyline
John Carpenter’s slow and deliberate immersion of the daunting and worrying fable of the corrupt, deceiving and indifferent economic, social and political society, that has wrapped itself around its people and who in turn have blindly accepted their fate. Multicultural in more forms than anticipated, are the leading and upwardly mobile alien race who have gelled themselves into the Human psyche and exploited it to its full potential. This is the story of an everyman, a no one, a Nada who stumbles upon their secret, via an underground movement, whose mission is to sabotage their plans and awaken the world to its sinister plans. With the help of a pair of sunglasses, that shows the world as it really is, not in color, but a black and white parallel world that the sub-conscious has chosen to ignore. With subliminal messages as “OBEY”, “CONFORM”, “MARRY AND REPRODUCE”, “CONSUME”, “WATCH TELEVISION” and “SLEEP”. It is through this thought control that the aliens have this world tied up and neatly packaged for its own manipulative uses, to further themselves at the expense of the meek, mild and the lowly sufferers of a job less and hungry world. This is the battle of self-awareness and one mans struggle with a reality check that has these alien beings staging war against the up-rising and rebellious armies from the gutters and streets. They Live You Sleep; where will your consciousness take you when the sleep is washed from your eyes. Welcome to the real world.