No937 My I AM NUMBER FOUR minimal movie poster 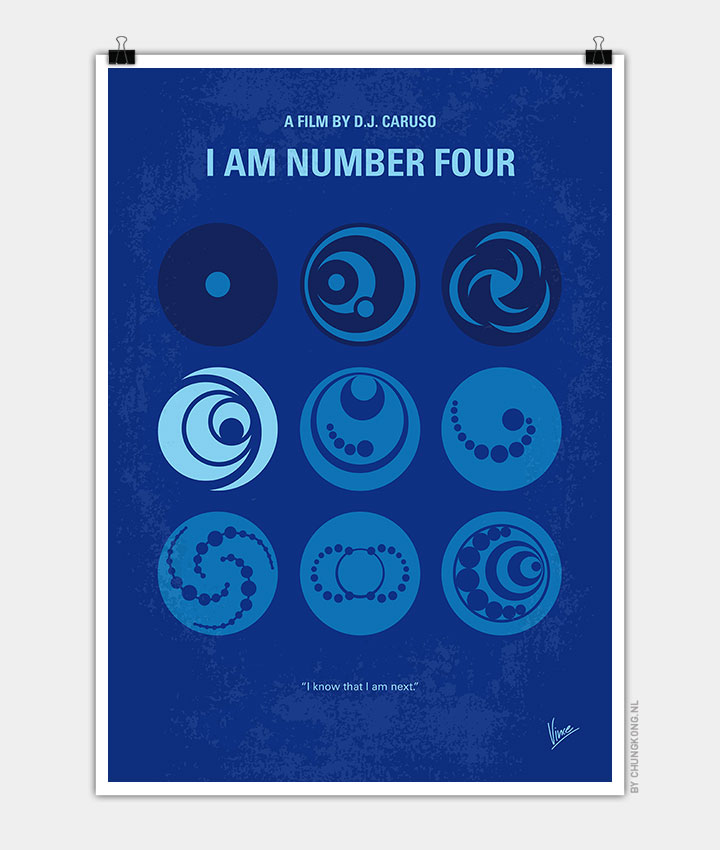 Aliens and their Guardians are hiding on Earth from intergalactic bounty hunters. They can only be killed in numerical order, and Number Four is next on the list. This is his story.

Storyline
High school senior John Smith, just moving into the small town of Paradise, Ohio, with his “father” Henri, is outwardly your typical American teenager; however, John (which is just his latest assumed name) is in reality a refuge from the planet Lorien. When he was but an infant, he and eight other Lorien infants escaped from Lorien’s holocaust when the planet was overrun by the marauding Mogadorians, who killed all the other Loriens. Each of the nine was assigned a protector/warrior, John’s being Henri. The nine are all on Earth, but each has no idea the whereabouts of the other eight.

The Mogadorians are out to find and kill the nine, in order, with John being number four. The death of number three, which John felt, prompts his and Henri’s move to Paradise, knowing he will be next. Although aware of his heritage, John only knows life on Earth as his true history; thus, he has many of those wants of the American teenager. Their move to Paradise coincides with John beginning to understand he has special powers, which made him one of the chosen nine. Although Henri tells John to stay under the radar, John has a less than inauspicious introduction to life in Paradise, largely because of his associations with two classmates. There’s Sam, an oft-picked-upon boy, who, largely because his long-missing father, has always believed in extraterrestrial life (passed down from his dad); and, there’s Sarah, the first girl to whom John has ever been attracted. The issue with Sarah is that she is the ex-girlfriend of Mark, the football team’s quarterback and school’s chief bully, who still wants Sarah back despite having bad-mouthed her publicly since their break-up. John’s notoriety in combination with the problems of dealing with the regular issues of teenage life may make John and Henri easier to find by the Mogadorians, which places the lives of all those in Paradise in danger. All the while, Henri continues with his other primary mission, which is to help John find the remaining five, who in combination can better battle the Mogadorians.